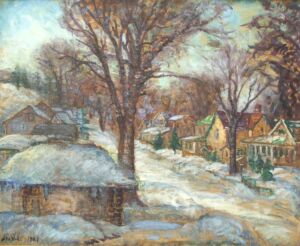 “Art, above everything else, needs absolute freedom for its growth. If you want to be a painter, then first be a rebel against anything which has a tendency to enslave you” – Ada Wolf, 1916.

Born in Oakland, California, Ada Wolfe (1878 – 1948) and her family came to Minnesota in 1889. Wolfe didn’t keep many journals or private papers that we know of. She was less vocal than other artists about her work, but she was certainly opinionated. While we don’t have much information on her home life, we are lucky to have a few news interviews with Wolfe that give us a glimpse into her thoughts toward the art world, consumerism, and what she believed would move art forward.

Wolfe studied at the Minneapolis School of Art, now the Minneapolis College of Art and Design. She learned from Robert Koehler, who was strict about his students understanding the fundamentals of art. Then, Wolfe went to New York to study with the Art Students League. While many of Minnesota’s renowned artists followed this path to the Art Students League, Wolfe was critical of her time there. She praised teachers at the Minneapolis School of Art for giving her the tools to understand color and composition, commenting that she learned “art fundamentals … without developing any deep admiration of their styles.”

Wolfe’s own art was filled with Fauvist influences, mostly in terms of how she used color. Fauvism is an avant-garde style focusing on bright and defined colors as opposed to precise linework and realism. Fauvist works often have distinct brushstrokes, as demonstrated in Wolfe’s Ivy Lane.

Her first solo exhibit was in 1917 at her brother’s manufacturing business. She displayed more than 300 oil paintings, her medium of choice, which she had created over the past decade. According to reviews, her works spanned a great many topics, and her marine scenes stood out the most. Her works included still lifes, Minnesota landscapes, and little portraiture.

Wolfe was adamantly anti-commercialist and disliked “sentiment in art.” According to Wolfe, commercial artists disliked their work, and thus their art. They were limited by a system intended not to make them flourish, but to profit off them. And worse, the artists become a part of the system, unable to rebel against it for risk of losing their livelihoods.

She believed art forms and theories evolved out of a hard-and-fast work ethic. Constant creation would bring about new ideas and techniques that would move the art world forward. Wolfe, herself, kept up a rapid output of paintings. A two-week trip to Duluth could produce dozens of works, and Wolfe praised Minnesota for having so many good sites to paint.

Interestingly, and perhaps tragically, Wolfe continued her work as an artist until her father passed away in 1923. Without his financial support, Wolfe was unable to continue her artistic career fulltime, and Wolfe began working for her brother in his factory. Census records show she was a manager there until the 1940s. In 1941, just seven year before her death, Wolfe’s artwork was highlighted with a special exhibit at the Minnesota State Fair.