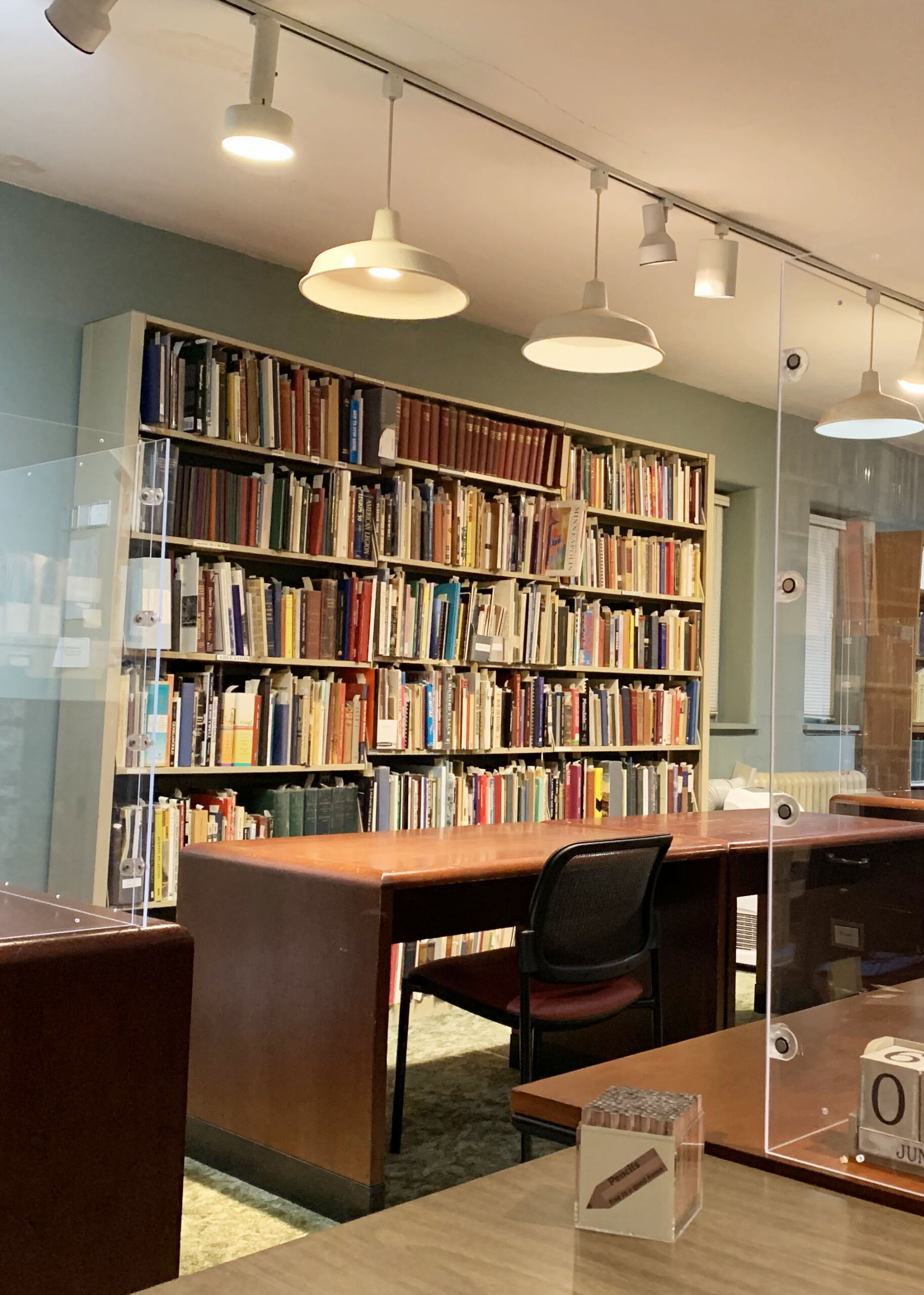 The reading room is currently open Thursday – Saturday by appointment only. Appointments can be scheduled by emailing: research@hennepinhistory.org .

To make the most of your research time, the archivist will discuss your research goals with you when you make your appointment. Please consider whether you need to consult resources in person before making a request to visit. Some research can be accomplished by email as well as in person.

If you are interested in self-directed research that does not involve archival materials here are some of the resources we provide:

The library has one computer station available for use with free access to Ancestry.com and newspapers.com as well as a scanner/copy machine (with a small printing fee).

Make Your Own History

The Research Library and Archives is currently seeking stories from Hennepin County residents regarding their experiences during the COVID-19 outbreak. Your story will contribute to the broader understanding to the history of Hennepin County during this time.

The following collections are available for research by appointment. Some collections may contain restricted materials as noted on the individual finding aids. Please contact the Museum Archivist to schedule an appointment before your visit as materials must be retrieved from our archives. Please review library open hours before your visit as they are different from those of the general museum.

Andrew Riverside Presbyterian Church was the result of the 1966 merger between Andrew Church and Riverside Church. This collection spans from 1888 to 2001, the year the original building collapsed. The collection includes administrative records from both churches. It also includes church bulletins, event and community materials and some photos of the church and its members.

Anne Barnum was a community activist that was involved in the Neighborhood Revitalization program.

Patricia D. Baker served as Minneapolis Park Commissioner for the 4th district from 1982 to 1997 and president of the Park Board from 1985-1987 and 1996-1997. This collection includes correspondence, meeting agendas and minutes, budget reports, local publications, and public event calendars of the Park Board. It also includes documentation, reports, and studies related to various committees and projects.

Coffeehouse Extempore was at one time the nation’s oldest continuously operated folk music and arts center. The non-profit organization, originally founded in 1964 as a youth drop-in center, attracted professional and semi-professional performers from around the country and world. This collection includes performance and marketing materials such as press releases, posters, artist’s promotional materials, newspaper clippings. It also includes information on the Country Store, Juice Bar and relocation and renovation projects.

This collection dates from 1917-1962 and includes materials relating to the Confer Brothers Realty Company. It features items specific to Ogden A. Confer, founder of the company, as well as company documents such as an early sales contracts, advertising news clippings and planning information for a housing development project in Maple Plain called Broadmoor.

This collection contains documents related to the CC. Programs make up most of the collection.

Charles Edward Doell served as Secretary of the Board of Minneapolis Park Commissioners for 30 years. He was also the Superintendent of Parks from 1945 until his retirement in 1959. The bulk of the collection consists of articles and essays written by Charles Doell for both presentation and publication in Parks & Recreation and Parks Sparks, among other magazines.

The Izaak Walton league was a woman’s chapter that focused on conservation and anti-littering campaigns.

This collection contains annual reports from 1937 – 2000, issues of The Pioneer, Girl Scout News, The Bridge, Cookie News, Currents, Especially for Volunteers and Parent Newsletter newsletters, material from the annual meeting in 2001, information about Marjorie Edgar and a copy of the book The Rowan Tree by Joyce Hakala.

The Greater Minneapolis Interfaith Fair Housing Program promoted “residential dispersion,” or neighborhood desegregation, in Minneapolis and its surrounding communities between 1959 and 1964. This collection houses organizational records from the full span of the nonprofit’s existence, from 1959 to 1965.

The Griswold, Rauma, Egge & Olson collection contains still images and documents related to the firm’s commissions, as well as several commissions executed by the principals John Rauma and David Griswold earlier in their careers. 1958-1986.

The Hearing Society of Minnesota (HSOM) was founded in 1922 by Horace Newhart. Originally called the Minneapolis Society for the Hard of Hearing, and then the Minneapolis Hearing Society, the organization provided education and services for the hearing impaired as well as their families and the community. The bulk of the collection includes administrative materials from 1922 to 1999.

This collection is made up of newspaper clippings that covered various events during former Minneapolis Mayor Eric Hoyer’s time in office. The scope of the issues covered between 1948-1957 are very broad including: civil rights, desegregation, fair housing, the labor movement, police vice activities, public housing, civil defense and public transportation.

John Jamieson was a MN DOT employee and Resident of Prospect Park. He fought against a freeway that was going to be built in Prospect Park and succeeded.

This collection contains the organizational history of the LWV of Minneapolis.

The Legislative scrapbooks detail the politics of running Minneapolis. Topics include politicians, taxes, MAC and sewage.

The collection was primarily donated by Betty Douglas Lins & other classmates. Since the archive was lost, various classmates (class of 1951-1967) compiled newspapers, photographs, yearbook, ephemera.

Minneapolis Board of Education

The bulk of this collection dates from 1964-1971, when much of the Minneapolis Board of Education’s work revolved around school desegregation. Other major issues included the district’s overburdened buildings and the creation of new curricular programs, such as the federal Experimental Schools Program and the Twin Cities Institute for Talented Youth.

This collection includes Board Meeting Minutes, governance and legal documents, capital campaigns, financial statements, newsletters, scrapbooks, and other memorabilia that covered various events during the 1956 to 2005 period of constructing the building and management of the Park Avenue residence, the funding to construct and maintain the residence, and the management of the portfolio and assets of the retirement fund itself.

The material in this collection was created by the Minnesota Department of Transportation, formerly known as the Department of Highways. It includes photographs and Right of Way surveys for potential highway projects between 1959 and 1978 within Hennepin County. The bulk of the collection features Hiawatha/Hwy 55, Hwy 100 and Hwy 94 (Minneapolis).

Hans Rosacker Floral Company was founded in Minneapolis in 1902 by Hans and Amalie Rosacker. This collection includes material about the Hans Rosacker Company and the Rosacker family. 1902-1999.

The St. Anthony Elevators collection houses insurance and real estate appraisals, technical drawings, and building photographs created for F. H. Peavey and Company and International Mineral and Chemicals Corporation between 1938 and 1982, along with materials related to the documentation of St. Anthony Elevator Number 3 for the Historical American Buildings Survey in 1992.

This collection contains personal and organizational history of SEMCOL. The early history is noted in the administrative history section of this finding aid.

The Southeast Minneapolis Planning and Coordination Committee (SEMPACC) was a political effort of Prospect Park, Como and the Marcy-Holmes Neighborhood.

The Temple Baptist Church collection contains a wide range of documents, photographs, and artifacts from 1909 to 1999, covering the time from the church’s founding to its dissolution.

The University of Minnesota is a public research university that was founded in 1851. The materials in this collection originated on the Twin Cities campus and include publications, programs, personal papers and news clippings donated from various sources.

The Womens Club of Minneapolis was founded in 1907. This collection focuses on their philanthropy, administrative documents and programs.

In order to better serve our patrons, the Hennepin History Museum partnered with Minnesota Digital Library and Hennepin County Library Digital Collections to create digitized copies of some of our collections. The original content still remains in the museum archives.