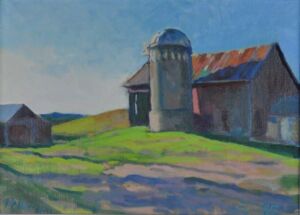 Bela Petheo (1934 – 2017), pronounced “PEH-tyu,” was an artist, refugee, and teacher. He was known as a wonderful “colorist in oil”, but his work spanned many forms of art. Petheo’s range came from years of study and exposure to different places, artists, and techniques. Hennepin History Museum is lucky to have several works by Petheo in its Fine Arts collection and we hope you’ll find his life story as amazing as we do.

Petheo was born in Budapest, Hungary. He earned an M.A. in Art History from the Eötvös Loránd University and studied under artist Pál Molnár-C while pursuing a Ph.D. through the Museum of Fine Arts in Budapest. Unfortunately,  Petheo was forced to leave his home country before he could finish his doctorate.

His abrupt departure came after the unsuccessful Hungarian Revolution of 1956, during which the Soviet government arrested 35,000 protestors and executed two hundred. Petheo was one of an estimated 200,000 Hungarians who left the country. Petheo, along with many other refugees, eventually made his way to America. But first, he went to Vienna, Italy.

Petheo continued his studies in Italy and his art began to evolve. In Budapest, he trained within the parameters of the realist tradition, a form of art where the artist attempts to depict their subject as accurately as possible. After leaving, his style was influenced by Austrian artist Oskar Kokoschka. Kokoschka was an impressionist who taught Petheo different brushwork techniques and encouraged him to include more bodies of water in his landscapes. Petheo also began to use brighter colors in his works, creating scenes that have an element of movement or life.

After two years in Italy, Petheo immigrated to New York City. He studied lithography at the University of Chicago and earned his M.A. of Fine Arts in 1963. After graduating, he became an assistant professor at the University of Iowa. Petheo then moved to Minneapolis in 1966, where he taught art at St. John’s University for over thirty years. He was the chair of the art department, and the University has a special collection of papers related to his work as an artist.

The painting you see here is titled Long Shadow at the Farm. Petheo painted it during his time at St. John’s University. I noticed his use of light and color. The sun is shining on the silo, which casts a shadow on the barn and ground beside it. This is a believable use of lighting, and grounds the scene in reality. The colors on the other hand, while broadly correct (green for grass, blue for the sky), are almost neon.  However, the most fascinating part of this painting to me is the map attached to the back of the frame.

A paper map, presumably created by Petheo to indicate the location of the farm, is taped to the back of the canvas. Stillwater is situated at the bottom of the map, and roads are drawn leading north to Oak Knoll. It’s always interesting to see what notes artists keep with their works. This map may have been for Petheo’s own memory, a reminder for him to return to the barn in a different season for a new perspective, or to give directions to the patron who purchased the painting. It’s a clue to this work’s history and one that delighted me upon its discovery.

Author Bio: Written by Summer Erickson, former Visitor Services Manager and Collections Assistant at Hennepin History Museum. Erickson graduated with a B.A. in Art History and Museum Studies from the University of St. Thomas in 2020. They cataloged HHM’s art collection in 2021. Erickson is currently working as a receptionist for MSS.