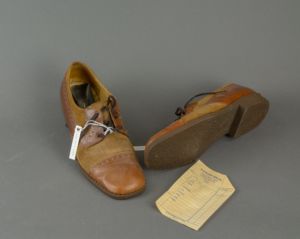 These shoes from Hennepin History Museum’s collection were purchased from Kaplan Brothers in Minneapolis, one of the first discount clothing stores in the Midwest. Kaplan Bros. opened in 1926 and sold workwear and outdoor clothing out of a building on Franklin Avenue and Bloomington Avenue that was originally built in 1886. This pair of shoes is from that early location as seen on its accompanying receipt. They became a staple of the community, garnering a reputation for high-quality products and exceptional customer service for low prices. Their clientele was extremely loyal and included important Minnesotan figures such as Vice President Hubert Humphrey.

Joseph and Jacob Kaplan immigrated to the United States from Poland in 1921. The following year, the two moved to Minneapolis and began their joint business in 1926. After Joseph’s death in 1955 from a heart attack and Jacob’s death in 1974, Joseph’s son, Stephen, ran the business from 1978 to 1984. The family owned a successful business for 60 years.

However, things weren’t always easy for Kaplan Bros. In 1953, the store was robbed. Burglars broke in via the drugstore next door and stole money from two registers and two safes. In 1986, the Franklin Ave. building burned down in a blaze possibly caused by lightning. There were no injuries, but the family considered it a sign to close the shop. Four previous employees -Gerald Kajander, Patricia Christensen, Dan Grant, and Pavel Wasserman- decided to buy the business and the name and reopen in March 1988 on the corner of Lake St. and 15th Ave.

Despite the loyal customer base, the store faced further challenges. The neighborhood became less safe, a problem they tried to alleviate by opening a second location on 73rd and Lakeland Ave in Brooklyn Park. However, business couldn’t support it and they had to close this store in March 2012.

Construction on Lake Street hampered store traffic. In December 2009, a pipe burst and flooded the basement and part of the first floor, destroying a lot of merchandise. The store had to close for four months for renovations. Supplier companies either went out of business or raised their prices, putting pressure on Kaplan Bros. to keep their prices low. Changing temperatures meant winters were less severe which in turn meant less demand for cold-weather products. A decrease in working jobs also impacted product demand. With all these cards stacked against them, Kaplan Bros. was unfortunately forced to permanently close their doors on February 16, 2013.

Author Bio: Written by Brianna Nielsen, Collections Intern at Hennepin History Museum. Brianna is working towards her MA in Art History and Museum Studies certificate at the University of St. Thomas.