The Zuhrah Fez: A Symbol of Fraternity and Philanthropy 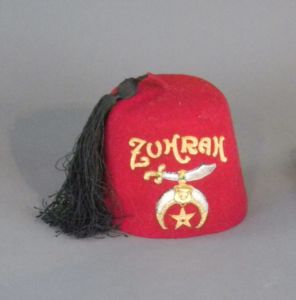 This fez from Hennepin History Museum’s collection belonged to a member of the Zuhrah Shriners, a Twin Cities chapter of the Shriner International fraternity. The Minneapolis center was founded in 1923 and is the largest in the Midwest region, with over 2,000 members. It’s a fraternity based on fun activities and philanthropy and is known for its founding of the Shriners Children’s Hospital.

The Shriners began in 1870, when a group of masons discussed starting a fraternity that focused on fellowship more than ritual. Masons Walter M. Fleming, M.D. and William J. Florence latched onto the idea. The story goes that Florence attended a party given by an Arabian diplomat and suggested a near-Eastern theme for the new fraternity. Fleming built on this theme and created the Ancient Arabic Order of the Mystic Shrine. This name was later shortened to “Shriners”.

Fleming then designed the emblem and adopted the fez as the Shriners’ official headgear in 1872. It is a symbol of the wearer’s membership and is worn at Shriners events, parades, and other such functions. Each is custom–made for the wearer, and a member may own more than one depending on his memberships.

The decorations and symbols on a fez can tell you a lot about its owner. Some fezzes will have additional decorations representing the role of the owner or their special rank. This fez has the Shriner emblem, which contains four symbols including the scimitar, the sphinx, the claws, and the star.

The scimitar symbolizes the backbone of the fraternity. The sphinx stands for the governing body of the Shriners. The claws on either side of the sphinx represent the Shriners’ fraternity and philanthropy. And the star represents the children helped by the fraternity through its founding of pediatric hospitals.

The embroidered gold “Zuhrah” above the emblem is Arabic for “flower” and indicates the owner of this fez was a member of the Zuhrah Shrine in the Twin Cities. Fezzes from other chapters of the Shriners would have their own chapter’s name, such as Zenobia, Egypt, or Yelduz. There are almost 200 Shriner temples around the world, with most being in the United States.

For more information on the Zuhrah Temple, see our previous blogpost on the topic.