The Nicollet Hotel: A Landmark of Minneapolis Cooperation 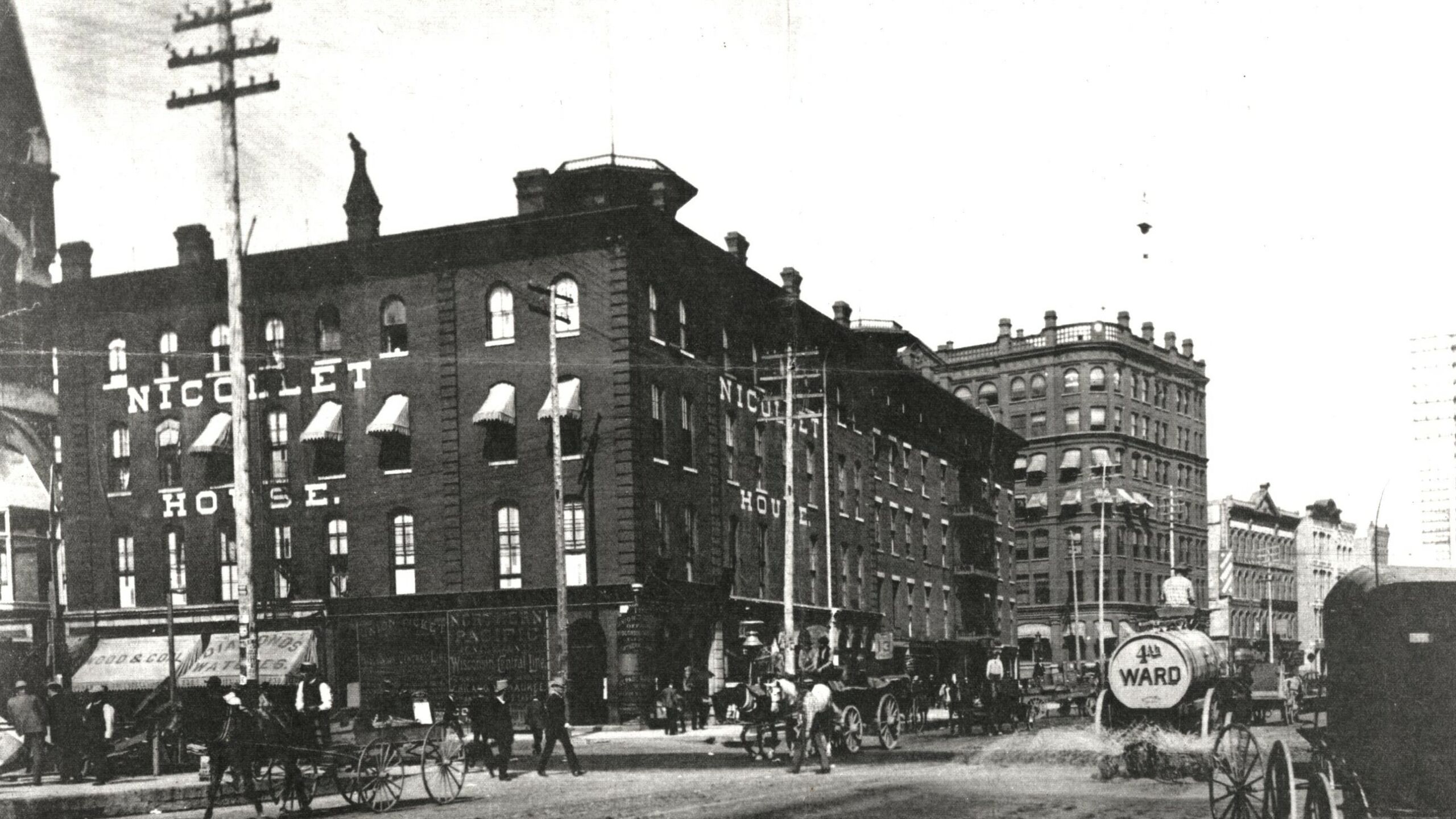 Looking down Washington Avenue across Nicollet and Hennepin in 1886, with the Nicollet House on the left. Image from HHM archives.

Though it has long since been demolished, the Nicollet Hotel was once the pride of Minneapolis. The original Nicollet House opened in 1858 as a four-story hotel (in addition to a ground floor that was leased to retailers) at the corner of Hennepin and Washington Avenues, and by 1870 had expanded its frontage to Nicollet Avenue. While the hotel prospered under various managements for years, by 1922 the relatively small building could no longer meet demand in the growing city. Furthermore, the façade had become outdated, and the need for new fire protection systems to meet city ordinances proved too costly for renovation to make sense. The Nicollet House was demolished, and an organization named The Nicollet Hotel, Inc. was formed to bankroll the construction of a new hotel in the same location. 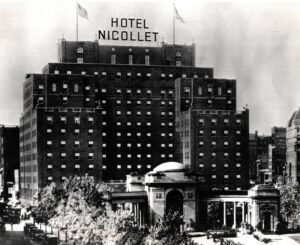 A view of the Nicollet Hotel from Gateway park circa 1935. Image from HHM archives

The new Nicollet Hotel was truly a community effort from the ground up, with over two-thirds of the $3.5 million hotel financed solely through the sale of preferred stock and lease-hold bonds to local citizens. Over 300 Minneapolitans volunteered in a stock sales campaign, which took only 8 days to meet its preferred stock sales goal. Every part of construction work for the twelve-story, H-shaped building was contracted locally, and the New Nicollet maintained its communal spirit on the interior of the hotel—all materials and furnishings for the 600+ room hotel were sourced from Minneapolis vendors, when possible. The grand public opening of the Nicollet Hotel on June 17, 1924, dominated local newspapers for days before and after. 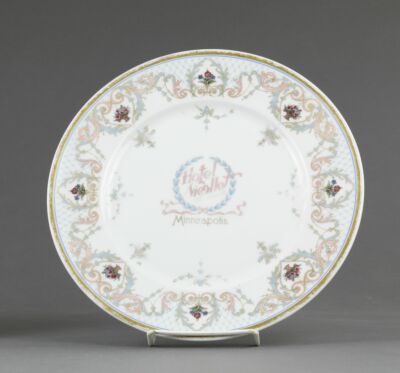 White Lamberton China service plate made for the Hotel Nicollet by Boutell Bro’s Minneapolis. Donated to Hennepin History Museum in 1939 by Marion Jung of Minneapolis, who worked in the advertising department of the Nicollet Hotel. Image from HHM Collections.

In addition to general information about the hotel, its history and its construction, pages upon pages were filled with promotions from local companies eager to advertise their contribution to the city’s new shining gem and capitalize on its high-class reputation. “Notice the Lighting Fixtures in the New Nicollet Hotel” advertised the Henkel & Best Co, while the A.Y. McDonald Mfg. Co. boasted their “prompt installation of the plumbing fixtures.” “When you dine at the New Nicollet Hotel,” touted Boutell Bros. Inc., “note the china with the Nicollet Crest.” The E.E. Peterson Sign Manufacturing Company proclaimed, “We made signs for the Old Nicollet, we are making them for the new.” The Levin Bros. supplied fifteen carloads of furniture, while the North Star Woolen Mill Company furnished the blankets. Even Smith Sand & Gravel Co. marketed their sand as having been used for the laying of brick and tile, and civil engineer company Egan, Field & Nowak plugged their work surveying the site. Countless companies marketed on the coattails of the New Nicollet Hotel, keen to profit from its prestige and proud of their part in its creation.

For several decades, the Nicollet was considered a premier hotel and was a hub for high society functions and community events. Yet as the city continued to grow and reshape, the once-grand hotel lost its luster, and after running into financial troubles the hotel was sold to Soul Harbor Church in 1973. When Soul Harbor went into bankruptcy in 1984, salvage companies stripped the interior furnishings, and the building was again sold to Kerr and Mortenson who hoped to turn it into apartments or offices. Once more, however, evolving safety standards necessitated major renovations to bring the building up to code, and the expense was deemed too great. Developer Carl Dranoff’s Historic Landmarks for Living bought the hotel in 1988, again with the hopes of converting it to apartments, but the nonprofit soon ran aground and no longer had the capital for the project.

Despite continued efforts to preserve this cherished and historic landmark, the Nicollet Hotel was demolished in 1991. From beginning to end, however, the Nicollet Hotel held a special place in the hearts of Minneapolitans as a triumph of collaborative community effort. 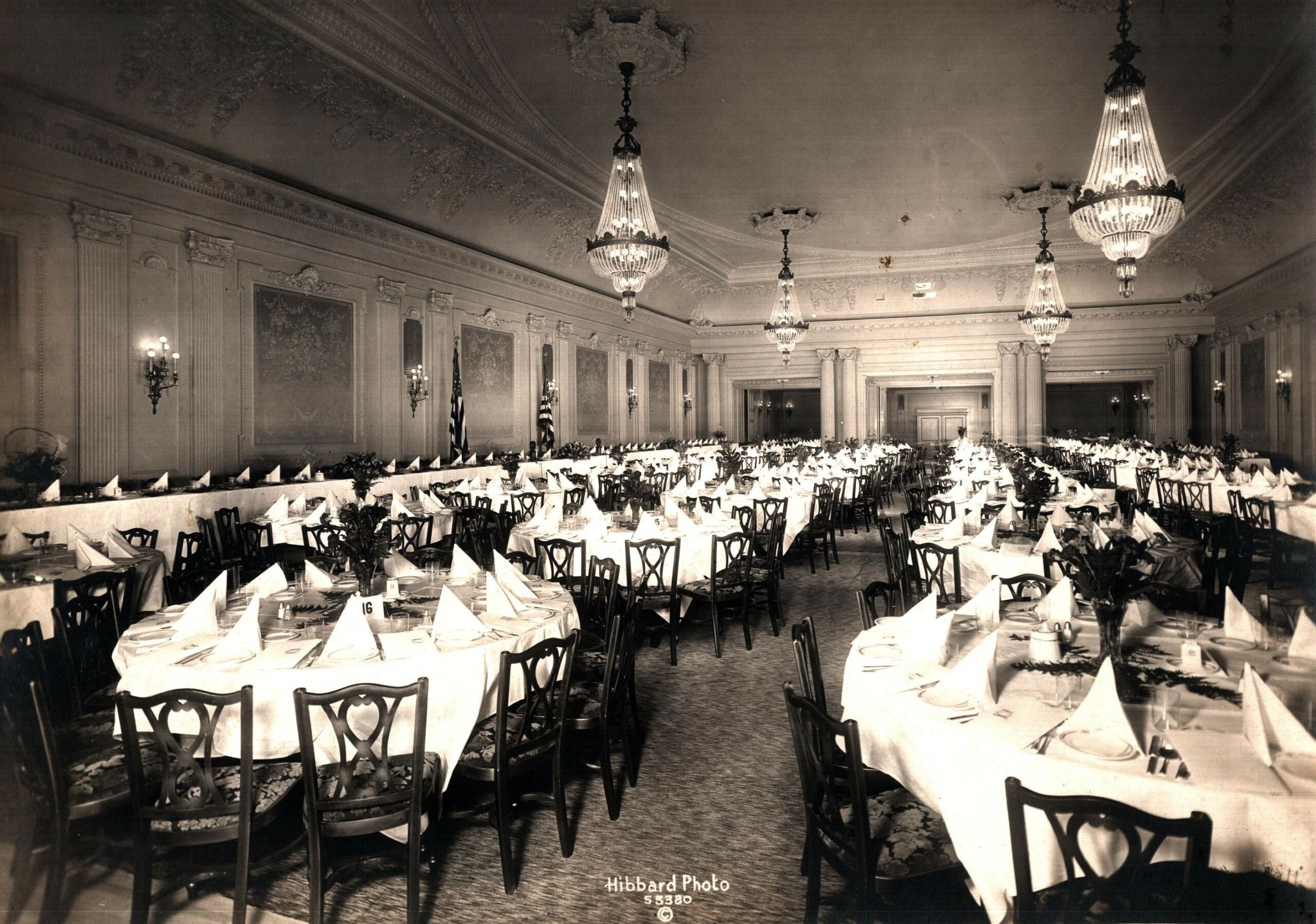 The banquet room at the new Nicollet Hotel in 1924. Photo taken by C.J Hibbard. Image from HHM archives.

Written by Hannah Kidder, Collections Intern at Hennepin History Museum. Hannah has a BA in history from Augsburg University and is planning to return to school to earn a master’s degree in collections care and management. She hopes to focus her studies on ancient artifacts and maintaining ethical, sustainable collections.