The Father of Figure Skating in Minnesota 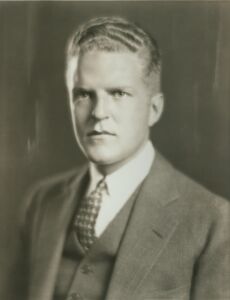 Lyman Wakefield II, pictured here, held many titles in his life: Lieutenant Commander of the U.S. Navy, President of the Minneapolis Chamber of Commerce, and Trustee of the Minneapolis Downtown Council are among them. But the title that caught my attention most was “The Father of Figure Skating in Minnesota.”

Born in 1911 in Minneapolis, Wakefield II was the son of Lyman E. Wakefield and Elizabeth Anderson, whose family founded Hutchinson, MN. His father was a founder of the First National Bank of Minneapolis, of which Wakefield II later became vice president. His parents had many connections that aided his career and they were able to send him to Dartmouth, where he joined the figure skating athletics program.

Wakefield loved ice skating. He was a member of the Figure Skating Club of Minneapolis, which began in 1919 under the name “The Minnesota Figure Skating Association.” He was active in competitions and supported figure skating in Minnesota his entire life.

As a freshman at Dartmouth in 1930, he won first place in a skating competition between twelve colleges. This was just the beginning of his skating career; he would go on to win the national intercollegiate championship four years in a row. In 1932, Wakefield also won a New Year’s Eve skating event at the Lake Placid Club in New York. According to the New York Times, his free skate program included “intricate dance steps, single- and double-foot spins, the difficult Salchow jump and a series of effective spirals….”

Just over a decade later, Wakefield paid for the building of the Ice Center, which was one of the first indoor public skating rinks in the Twin Cities. The Wakefield family hired Elizabeth Close, a mid-century modernist, to be the architect for the rink. The rink became the home for the Figure Skating Club of Minneapolis and was later donated to the Breck School. The Skating Club is now based in Augsburg University.

In the 1960s, while Wakefield was no longer skating competitively, he was still very much involved in the local skating scene. He was president of the St. Paul Figure Skating Club and organized the skaters for the St. Paul Pop Concerts. These concerts offered food and musical accompaniment courtesy of an orchestra and vocalists.

Upon his passing in 2001, Wakefield’s obituary included nearly a dozen accomplishments and titles. Some were community-based, others were business oriented, but “Father of Figure Skating in Minnesota” stood out to me. Maybe because it was simultaneously grand and personal. I’m glad he was able to enjoy the sport, and to support his community’s enjoyment of it as well.

Author Bio: Written by Summer Erickson, Visitor Services Manager and Collections Assistant at Hennepin History Museum. She graduated with a B.A. in Art History and Museum Studies from the University of St. Thomas in 2020. She is currently cataloguing and creating a digital exhibit of Hennepin History Museum’s art collection.