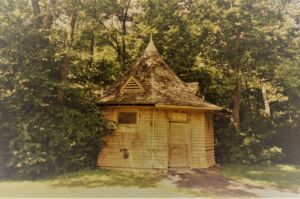 Imagine the spiders that would’ve been in here!  This is the men’s restroom from Lake Harriet Park in 1998 before restoration started.  The Lake Harriet Restroom Restoration Committee (LHRRC) or Spiff the Biff took on the task of restoring both the men’s and women’s restrooms in the park in the late 90s and early 2000s.

When you hear the terms timbre-framed pagoda and shingle-clad, you don’t often think of a restroom, but when an architect like Harry Wild Jones designs them, this is what you get.  HWJ is the same architect who designed the Washburn Park Water Tower and the Cream of Wheat Building, and of course the Lake Harriet streetcar station and pavilion(s) of 1891 and 1903. Jones, who was on the park board from 1893-1904, also organized the department of Architecture at the University of Minnesota.

In 1996, a group of residents and organizations banded together to form LHRRC. Some of the residents who gave their time to the project were professionals in construction, architecture, preservation, and fundraising.  It was their passion and efforts, combined with the timing of the Chain of Lakes improvement initiatives in the late 90s that fueled the fire to see the project through.

The restrooms were added to the historic registry in 1980 but closed in 1988 due to their condition.  Their design, however, was the inspiration for the new bandstand, built in 1986, as well as the refectory, added in 1990.

The restoration allowed the park to address some long neglected safety needs and accessibility issues for public restrooms.  The park board alone contributed $45K to the restoration that was estimated to be a $125K job, but the total restoration ended up costing $225K.  The organization received more support from General Mills Foundation, Elizabeth Quinlin Foundation, construction and supply companies, the Linden Hills Neighborhood Council, the Americans with Disabilities Act Fund, residents, other neighborhood associations, contractors, and anonymous donors to eventually reach their funding goal.  They also raised money through a community fundraising event. 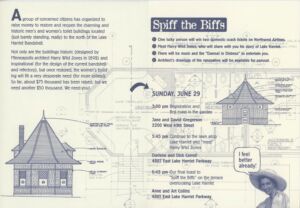 When it was all said and done, the Lake Harriet Restroom Restoration Committee held an opening ceremony in July of 2002.  Park board president, Bob Fine presided over the ceremony, and even Mayor R.T. Rybak “said a few words” according to their program notes.  Attendees got to tour the restrooms and meet a costumed Harry Wild Jones who talked about the architecture. The 110-year-old restrooms were beautifully restored to their original colors on the outside, brown shingles and painted green trim.  On the inside, the fireplace masonry and floor tiles were repaired in the waiting area.

When I saw this collection at first, I wondered who cares about toilets and why.  Spiff the Biff cared and saw value of the past informing the present for the better in this situation.

The pavilion restrooms are the oldest buildings still in use by the park board. The Spiff the Biff collection is available for research.  It was processed with funding from a Legacy Grant from the Clean Air and Water Fund.