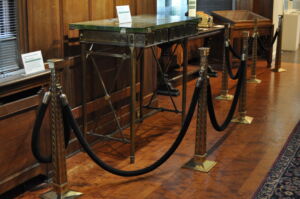 These six brass stanchions with their velvet ropes tell a fascinating history of architectural styles and a Minnesota-based bank. They originally stood in the Northwestern National Bank building, which opened in 1930 in downtown Minneapolis. While the building has long since disappeared, these stanchions are now a part of the Hennepin History Museum’s collection.

The Northwestern National Bank, was founded in 1872 by a group of Minneapolis businessmen, most of whom made their money in the milling industry. The bank immediately faced many challenges, from grasshopper plagues to mill explosions. Because the bank primarily served those involved in milling, these catastrophes spelled hardship for the new institution.

Northwestern survived its first decade and began to acquire and merge with other banks throughout the 20th century. These partnerships gave the bank a large financial safety net, which aided it in the Great Depression. In fact, it was at the start of the financial crisis in 1929 that Northwestern decided to build their new headquarters.

The Northwestern National Bank building was constructed at a cost of $6 million. It was sixteen stories tall and was built according to the art deco style, which became popular around World War I. Only the best for the Northwestern’s headquarters. This high standard included the bank’s furniture and décor. 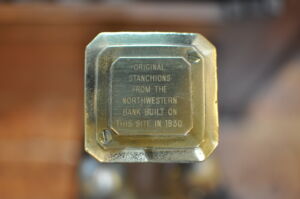 These stanchions are wonderful examples of art deco. Their geometric patterns suggest the growth of both nature and technology, without using naturalistic imagery. When art deco is brought up, many think of the sweeping architectural grandeur of the Chrysler building in New York City. But by the time these stanchions created, art deco was slowly losing its reputation for opulence.

With the beginning of World War II just a decade away, the art deco furnishings and architectural adornments of the building would soon become remnants of a by-gone trend. The technology that art deco evokes in its patterns and designs would develop rapidly with World War II, leaving art deco behind and paving the way for the more utilitarian style of modernism.

In 1982, Northwestern’s headquarters fell victim of the Minneapolis Thanksgiving Day Fire, which also engulfed an entire block of the city. Fortunately, no one died in the fire, and the lower floors of the building were untouched by the flames. Thus, some objects, such as these stanchions, were recovered. However, the building itself was demolished in 1984. 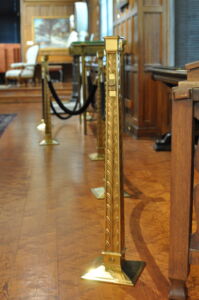 The stanchions now reside in the Hennepin History Museum. They stand in the Great Room along with other relics of the NWNB, such as an ornate iron grill and a check writing desk. Their geometric beauty showcases a style that touted the glamour of technology. You can see these stanchions and other items donated by Wells Fargo on display at Hennepin History Museum’s Great Room through 2021.

Author Bio:  Written by Summer Erickson, Visitor Services Manager and Collections Assistant at Hennepin History Museum. She graduated with a B.A. in Art History and Museum Studies from the University of St. Thomas in 2020. She is currently working with Save the Boards to Memorialize the Movement to preserve protest art related to George Floyd.