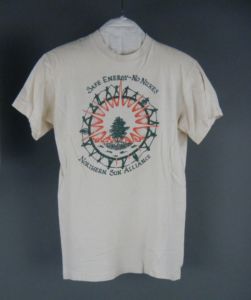 The phrase “Safe Energy – No Nukes” can be found on protest signs, bumper stickers, and t-shirts like this one in Hennepin History Museum’s collection. The anti-nuclear movement in Minnesota was strong throughout the late 1970s and 80s and left an impression on the environmentalist perspectives of today. The Northern Sun Alliance was a large proponent of the movement and created this shirt with the help of the Northern Sun merchandise store on Lake Street.

The Northern Sun Alliance was a coalition of anti-nuclear groups active from 1977 to 1989. Its objective was to prevent further usage of nuclear power through legal or illegal means. The group believed solar energy would replace nuclear and coal energy in the future and protested the construction of nuclear plants.

Members of the Northern Sun Alliance ranged from geologists to laymen and students. They staged peaceful protests outside the Minneapolis offices of the Northern States Power Co., holding signs and passing out informational pamphlets with health concerns over radiation. In 1977, members released tagged balloons from plant sites around Monticello and Redwing. Those who found the balloons read the tags, which explained the balloons symbolized radioactive fallout; a physical demonstration of how far the radiation could travel from the original sites.

These tactics were used to both inform and scare the public into action. Activist Kate Jones Randall explained the Northern Sun Alliance’s motive was to “move people from fear to anger to action.” She believed the future of energy was renewable, decentralized, and community based.

The partial meltdown of the Three Mile reactor in 1979 gave the coalition a burst of membership. This meltdown brought the risk of nuclear power to the public’s attention, prompting a larger discussion of the use and implementation of nuclear power plants. Minnesota joined the debate more fervently when the Northern States Power Co. announced plans to build a new reactor sixty miles southeast of the Twin Cities. The reactor was never built due to the public outcry and push-back from activists like the Northern Sun Alliance.

The coalition became inactive in the late 80’s and now the only physical continuation of its work can be found in the Northern Sun store. The Northern Sun merchandise store was originally a part of the Alliance, but parted ways with the group in 1984. Nowadays, the Northern Sun sells t-shirts, stickers, and other items promoting environmental consciousness and global peace. It’s not the protest signs or balloons, but another form of peaceful activism altogether.

Author Bio: Written by Summer Erickson, Collections Volunteer at Hennepin History Museum. Summer recently completed her BA in Art History at the University of St. Thomas in St. Paul. Her focus was on Museum Rituals and Street Art.

“Who are the antinuke people and what are they after?” Star Tribune, August 18, 1978. https://startribune.newspapers.com/image/186855890/?terms=northern%2Bsun%2Balliance