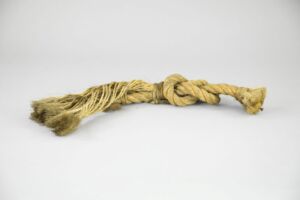 Today, it seems too bizarre to have happened, but it did. What’s more, it happened twice. The John H. Stevens House was transported by schoolchildren. This piece of rope, held in the collection at Hennepin History Museum, is a fragment of one of the ropes used the first time schoolchildren moved the house in 1896.

Col. John H. Stevens built the house in the winter of 1849-50. Locals recognize the significance of the house as the first built by a white man west of the Mississippi River on land that would become Minneapolis. At various times, the Stevens House served as a polling place, a courthouse, and meeting place. It was even in this house both the city of Minneapolis and Hennepin County were formed.

The land on which the Stevens House originally stood is now occupied by the Minneapolis Post Office on South First Street. The house was moved a few times before it was decided that the house should be preserved in Minnehaha Park. At the time, the decision was made to use eight horses and a relay of schoolchildren to accomplish the feat. Ten thousand children in seven relays were involved in the effort, moving the house a total of six miles. There were reports that during this move the teamster managing the horses complained that the children were moving too quickly. Excited onlookers lined the streets to watch the house being moved. There had been hopes that Col. Stevens would be there but unfortunately he was unable to attend due to illness, having been “stricken with paralysis as the result of the excitement,” later revealed to have been a stroke.

The house was moved one last time in 1983, this time within the park, a distance of 200 yards. The 1896 move was commemorated by again having schoolchildren transport the house. During this move, the truck driver that was assisting the children claimed he had his brakes on the entire time. This time the names of all the children who participated in the move were recorded and preserved. Next, the house underwent an extensive restoration and reopened to the public in 1985 where it remains open to this day.

Author Bio: Written by Jason Burnett, Collections Intern at Hennepin History Museum. Jason has a BA and MA in History from the University of New Orleans. He is currently working towards an MA in Art History and a Certificate in Museum Studies at the University of St. Thomas in St. Paul, MN. His focus is on 19th and 20th century art and museum issues of diversity, equity, and inclusion.