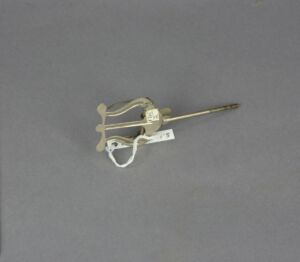 This marching music stand in the collection at Hennepin History Museum was used by a clarinetist in the Minneapolis Journal Newsboys’ Band. It would have screwed into a bracket on the front of the clarinet and held sheet music so that he could see it while marching.

The Minneapolis Journal Newsboys’ Band was founded by the paper in 1897. The newspaper provided the boys’ instruments as well as their uniforms of scarlet coats and white pants. Additionally, the Minneapolis Journal hired Professor C.C. Heintzemann to instruct the boys. Almost immediately after their debut on Memorial Day 1898, the band became a fixture of Minneapolis parades and events. In October of 1899, the band played in a parade honoring the Thirteenth Minnesota Volunteer Infantry’s return from the Philippines, where the unit had fought in the Battle of Manilla as part of the Spanish-American War. President McKinley was in the audience at this parade and said of the band “It is the most unique band in the great parade. It is hard for me to realize that such young boys can play such high-class music so delightfully.”

By the turn of the twentieth century, the band began touring around Minnesota and neighboring states. In 1901, they even played at the Pan-American Exposition in Buffalo, New York. That year the band racked up a total of 5000 travel miles!

By 1902, the band had grown to fifty-five members and was, as the Journal was proud to report, the largest military band in the country and the largest boys’ band in the world. Positions in the band were so sought after that there was even a Newsboys’ Band Auxiliary of boys who were learning an instrument in hopes of being called into the main band when a member left. The band continued to flourish, travelling to play at the 1903 Dominion Fair in Winnipeg and the St. Louis Exposition of 1904.

In 1905, twenty-six of the oldest members of the band left to form the Minneapolis Journal Cadet Band, thus making room for a new class of boys to move up into the Newsboys’ Band. The band’s name was changed to the “Working Boys’ Band” in 1913 and they continued to play under this name until 1944, when the band was dissolved due to lack of financial support.

Written by Jason Burnett, Collections Intern at Hennepin History Museum. Jason has a BA and MA in History from the University of New Orleans. He is currently working towards an MA in Art History and a Certificate in Museum Studies at the University of St. Thomas in St. Paul, MN. His focus is on 19th and 20th century art and museum issues of diversity, equity, and inclusion