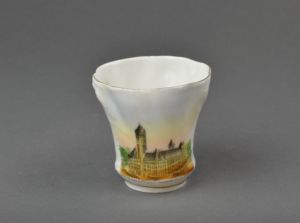 This souvenir cup from Hennepin History Museum’s collection has a familiar view of Minneapolis City Hall and Courthouse. It can be found on postcards, travel blogs, and as we see here, dishware. However, this painted picture of the building is one of the earliest renditions we have. It was made in 1906, the year construction on the new City Hall was officially declared finished.

In 1887, Minneapolis needed a new City Hall and Courthouse. So, Minnesota representative C. H. Pettit helped create a Municipal Building Commission to pay for a new building to be built on the site of the first public schoolhouse west of the Mississippi. A design competition was held, and a Minneapolis architecture firm called “Long and Kees” won with a design based on the style of the famous American architect Henry Hobson Richardson.

The new building was going to cost an estimated $2,000,000 but went completely over budget because of materials. Originally, only the foundation was made of pink Ortonville granite. However, after the cornerstones were laid, the public liked the stone so much, it was voted that the rest of the building use that material as well. This raised costs by over $1.5 million.

The result was beautiful. Minneapolis City Hall and Courthouse is five stories tall, with a 365-foot-tall clock tower that was added in 1916. At the time, this clock was the largest public timepiece in the world, even rivaling Big Ben in London. The building itself was the tallest in Minneapolis until the construction of the Foshay Tower in 1920. There are stained glass windows and a massive 14,000-pound statue of the “Father of Waters, Mississippi” in the atrium.

After the building’s completion, not only did both Hennepin County and the City of Minneapolis government offices move in, but a blacksmith shop, a horse stable, a wool brokerage, and a chicken hatchery came to live in the new City Hall. While many administrative offices have moved out, as well as the various shops and animal pens, Minneapolis City Hall and Courthouse is still primarily used for governing purposes. Visitors can stop in for a Tower Bell concert or even rent out the atrium for a wedding surrounded by marble staircases and stained glass.