Madame Mitchell and the Hat-Making Industry 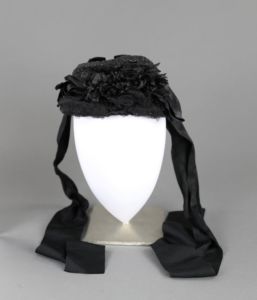 Madame Mitchell was a talented local milliner in the late nineteenth century and the creator of this hat, which can be found in the collection of Hennepin History Museum. She worked in Chicago for twenty-five years before opening a store on Nicollet Avenue in 1883 which was known for its elegance. She sold hats and bonnets, ribbons and plumage, and many other accessories and adornments. According to The Minneapolis Tribune, Madame Mitchell held “the distinction of being the most talented milliner in the city,” and her establishment was “positively by far the most beautiful in Minneapolis.”

Millinery, or hat-making, was once a booming business. The term “milliner” originally referred to a native of Milan, Italy or referred to someone who sold women’s fashion items imported from Milan. Eventually, the term grew to refer to a hat-maker.

In the nineteenth century, millinery was almost entirely done by skilled women such as Madame Mitchell. From 1860 to 1930, women of all economic and social classes bought clothing and hats from dressmakers and milliners. Milliners were generally well-paid, and many were able to make a decent living for themselves.

At the time, hats were essential parts of women’s fashion. They were elaborate objects, with ribbons, feathers, and trims. Hats became so common that a woman without one was deemed inappropriate.

This changed after the World Wars. The clothing industry became industrialized, with clothing and hats made in factories and sold in department stores. The introduction of machine cutting and sewing lowered costs, which opened the option for women to buy multiple low-quality hats rather than one high–quality one. Women were also more likely to buy ready-made hats because there was no need to go in for multiple fittings.

In the end, the most striking blow to milliners was the turn of fashion. Hats themselves went out of style. Complicated hairstyles like the beehive and bouffant became popular, and hats would only cover up the work that went into them. Nowadays, hats can be worn casually, for ceremonial purposes, or as a fashion statement. While the days of Madame Mitchell’s ornate hats may be gone, fashion is a cycle. Hats could come back in style any day now; it all depends on what people like.