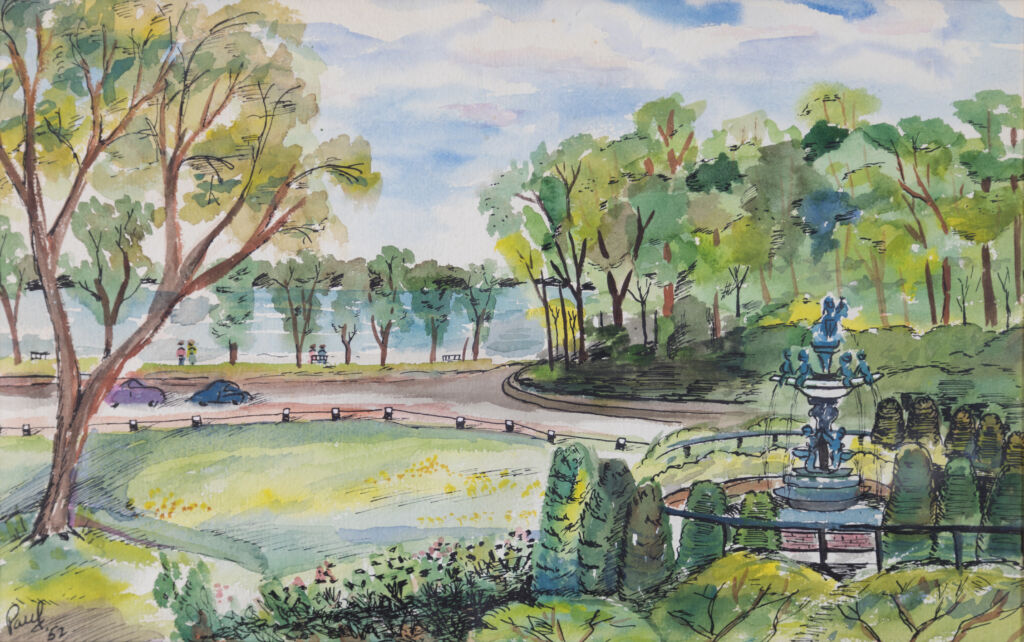 Local artist Paul F. Johnson completed this watercolor titled Heffelfinger Fountain in 1952. The Heffelfinger Fountain resides in Lake Harriet’s Rose Garden. It is around ten feet tall and made of bronze with a marble basin. Decorated with fauns and satyrs, the decorative structure’s Northern Italian Renaissance style stands out in the garden.  So why is a renaissance fountain in Lake Harriet’s parks? And how is it holding up so many years later?

The fountain originally resided in Villa Montalto in Fiesole, Italy. The fountain was built in the late 1500s for Pope Sixtus V. Villa Montalto was the epitome of the Renaissance city. It was full of decorative elements and the layout was planned to be pleasing to the eye. In the nineteenth century, the villa was largely demolished and replaced by a railway station.  It was in the early 1920s that Frank Totten Heffelfinger bought the fountain from the Villa.
Heffelfinger donated the treasure to the Minneapolis Board of Park Commissioners in 1944. It was kept in storage throughout WWII and the Board accepted and dedicated it in 1947. The installation cost $8,000 and was paid for by Heffelfinger. At the dedication, Francis A. Gross, the president of the Board, said “It will inspire [Minneapolis residents] to do what Heffelfinger has done – render fine civic service for the prosperity … of a city.” The director of the Minneapolis Institute of Arts offered a lecture on Renaissance Art. The water was turned on and the fountain became a staple of the Rose Garden.

Nearly eighty years later, the Heffelfinger Fountain needs restoration. Founts are a complex combination of sculpture and plumbing and are high maintenance even in areas without the drastic seasonal changes of Minnesota. Workers ensure pipes thaw and acclimate to new temperatures without bursting, motors are kept running, and roughage like leaves and soil are cleared out of drains and basins. Because of underground iron deposits, the statuary was prone to rusting. The deposits were removed in 2012 when the fountain was partially repaired by the Minneapolis Parks and Recreation Board. The Board hired an engineer for mechanical repairs, some of the underground plumbing was removed and the sculptures were replumbed.

After travelling across the world, waiting to be reconstructed, and undergoing repairs, the Heffelfinger Fountain deserves to be enjoyed. Hopefully, the fountain will remain running and in good condition for many years to come.
Author Bio: Written by Summer Erickson, Visitor Services Manager and Collections Assistant at Hennepin History Museum. Erickson graduated with a B.A. in Art History and Museum Studies from the University of St. Thomas in 2020. They are currently cataloguing Hennepin History Museum’s art collection.