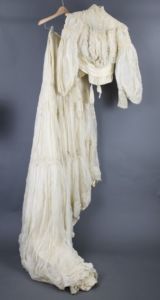 This lovely wedding dress from Hennepin History Museum’s collection was worn by Mrs. Elizabeth Calderwood Case for her wedding to George P. Case in 1904. Though the couple wed in Manhattan, NY, Elizabeth was originally from Hennepin County and would return home many times. Her life was defined by experiences ranging from elegant cocktail parties to a shipwreck. As a socialite, Elizabeth was active in many circles, gardened voraciously, and was known for her involvement in various clubs.

Born to John F. Calderwood and Leila Moore in 1884, Elizabeth was privileged. John was the Minneapolis Street Railway Company’s auditor, and his work allowed for the family to live comfortably. In 1902, the Calderwoods moved to Brooklyn, NY for John to become the general manager of a large rapid transit line.

New York life was eventful for the Calderwood family. In 1904, Elizabeth married grain-dealer George P. Case. A year later, her father was shipwrecked while on a New York steamer set for Key West. He washed ashore after three days in Galveston, Texas.

When Elizabeth and her husband moved to Minneapolis in 1912, her father moved with them. They bought the Holmwood manor and dairy farm near Long Lake, but the dairy farm ceased to be functional after 1916. The family then used the manor solely as a summer home.

Elizabeth quickly joined the elite social circles of Minneapolis. She attended and hosted parties, cultivated an impressive garden of flowers and trees that overlooked Long Lake, and wrote a cookbook with Mrs. James C. Wyman in 1935. Elizabeth’s flowers won awards at the Annual Minnetonka Garden Show. She was the treasurer of the Lake Minnetonka Garden Club for several terms and offered talks on her gardening experiences.

Elizabeth passed away in 1953 at age sixty-eight. Her husband preceded her in death nine years prior, and they had no children. The socialite’s name may be found in many issues of the Star Tribune, but beyond her social life there isn’t much information to be found. We do however have knowledge of the significant events in her life, such as her 1904 wedding when she wore this dress, which was donated to HHM in 1982 along with Mrs. Case’s wedding trousseau by Mrs. Ernest Watrous.