A Siren’s Song: The German Zither 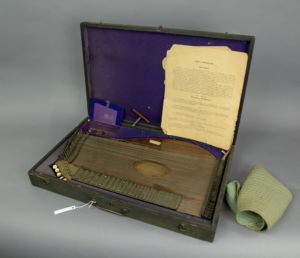 This is a German Concert Zither from Hennepin History Museum’s collection. Known for its high difficulty level, the modern-day concert zither has 187 basic tones and a greater range than both the piano and the guitar. It is also the traditional instrument of the Bavarian Alps, and is popular in Austria, Vienna, and Southern Germany.

The zither began as a folk instrument in the 19th century. It was called a Volkszither in Bavaria and Austria and had less than twenty strings. At this time, the zither’s strings had no tone uniformity, which made it impossible to play the instrument in more than three keys. Its limited range hindered its popularity in larger circles, until Johann Petzmayer (1803-1884), a Viennese musician, became a virtuoso on the instrument.

Petzmeyer toured Europe and the Near East, performing on the zither for all parts of society. Audiences of all sorts, including royalty, came to enjoy the zither’s sound. Unfortunately, these audiences did not include other professional musicians until 1862, when instrument maker Max Amberger converted the zither into a concert instrument. He rearranged and added to the strings, giving a greater range to its sound.

After the concert zither’s evolution, classical music was composed specifically for it by composers and virtuosi like Hans Drechsel, Georg Freundorfer, and Rudi Knabl. The concert zither’s use in the soundtrack of the film “The Third Man” caused sales of the instrument to skyrocket in 1949. While not considered a mainstream instrument, its sound is beautiful and a delight to the ears.

Franz Von Kobell, a Bavarian poet, described the zither’s sound in a poem. Translated into English, it reads “The zither plays a siren’s role. She holds me captive, heart and soul.”