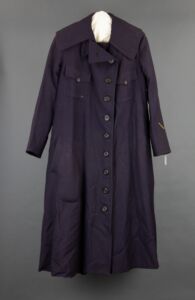 Susan Treice Naysmith donated this wool coat to Hennepin History Museum in 1964. Naysmith wore it during her time as a military nurse in World War I and it serves as an artifact of a short period of her rather full life. Born in Altoona, Pennsylvania in 1876, Naysmith was both married and widowed at age 23. She never remarried and the next documented information we have on Mrs. Naysmith comes fifteen years later.

In 1914, Naysmith began working as the Superintendent of Nurses at the Minneapolis City Hospital, now Hennepin County Medical Center. Two years later, she was employed by the University of Minnesota hospital as the Supervisor of Nurses. This connection to the U of M was what lead to her involvement with Base Hospital no. 26.

In 1916, before the United States formally declared war with Germany, the Surgeon General asked the U of M and the Mayo Clinic to prepare an army base hospital. Base Hospital No. 26 was organized in 1917 with the support of the American Expeditionary Forces. In December of 1917, the unit received a call for active duty and reached Allery, France six months later.

Naysmith joined the unit in 1918 and went with the Base Hospital unit to France. The hospital had a capacity of 1,000 beds, yet during Naysmith’s time there, the hospital cared for nearly 6,000 patients. According to records, many of the patients in the hospital were dealing with influenza or pneumonia, as well as lesser injuries like cuts and sprains.

Naysmith was discharged on May 28, 1919. Upon her return to the U.S., Naysmith became the Superintendent of Nurses for Glen Lake Sanitorium, where she worked until 1941. Her time there was well spent, and to cement her legacy, the nurses’ Residence Building was renamed Naysmith Hall in 1956. She died at the age of 98 on January 27, 1975 and was buried at Fort Snelling with the title of US Army Nurse.

Naysmith oversaw whole nursing departments for most of her career. While we don’t know her position as an army nurse, due to the lack of ranks given, we can imagine she approached the duty with the same confidence and capability demonstrated in her other positions. Hopefully, the work she and countless other army nurses provided will someday recognized in an official capacity. For now, we thank Susan Naysmith for her service.

Author Bio:  Written by Summer Erickson, Visitor Services Manager and Collections Assistant at Hennepin History Museum. She graduated with a B.A. in Art History and Museum Studies from the University of St. Thomas in 2020. She is currently working with Save the Boards to Memorialize the Movement to preserve protest art related to George Floyd.