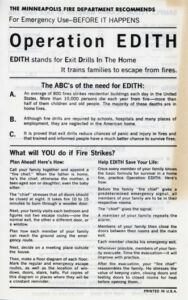 This flyer makes me think of those safety films we had to watch in grade school.  I remember a long walk through the bowels of the school to sit crisscross with my peers in a dark room near the white light of the projector to see what happened when someone yelled FIRE in a movie theater vs. the calm exit that ensued after the usher stopped the film and directed people to the nearest exit.  In that basement, we learned to look for exits when we went into public spaces, check the temperature of the door before opening if you see smoke, and never ever yell FIRE in a movie theater. Oh! And Stop-Drop-and Roll.

Now I know that the timing of those haunting films we watched annually in the school basement had a lot to do with the civil defense movement – more specifically, women’s civil defense.

The Women’s Civil Defense Council (WCDC), formerly the Hennepin County Women’s Conference for Defense began as part of the Minnesota National Civil Defense program under the leadership of Mrs. August N. Satterlee. Satterlee received recognition from the regional director of the Department of Defense (Warren P. Cleary) upon her retirement in January of 1966.  Satterlee was recognized for 25 years of service to her community for “work in WWII and The Korean Emergency”. 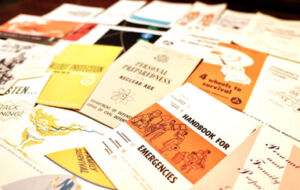 The Women’s Civil Defense Council collection has more than 60 pamphlets on topics like fire safety and fallout preparedness.

This information often came in the form of pamphlets.  The WCDC collection we’re currently processing with the help of a Legacy Grant from the Clean Air and Water Fund includes more than 60 pamphlets on various home safety and civil defense topics. This collection also includes correspondence and meeting minutes from 1966-1976.

Dues was only $1.00 so the treasury reports that the account hovered around $60-$70 and rarely broke $100.  These funds weren’t enough to cover the cost of monthly meetings 5 months out of the year at Donaldson’s Garden Room or the annual meeting at the Curtis Hotel in April.

The organization raised dues to $2.00 in 1971 to keep up their efforts but dissolved a few years later without ever having much financial support. It didn’t help that the state’s civil defense ended in 1974.

For more information on the Women’s Civil Defense Council, send an email to research@hennepinhistory.org

Author Bio:  Written by Michele Pollard, Archivist at Hennepin History Museum. She holds an MLIS from Catherine University, and an M.A. in Communication Studies from the University of Iowa.