What would happen if the Rolling Stones held a concert, and nobody came?

When the Rolling Stones came to U.S. Bank Stadium October 24, 2021, they put on what was by all accounts a good show for the 45,000 fans in attendance. This, their 11th concert in the Twin Cities over their long careers, was rare for not being a sellout (although still a considerable crowd given the shadow of covid-19).

Shirley Nelson didn’t go. “I thought the tickets were too much money. Seats weren’t that good compared to what I had in the past,” she said. Indeed, not quite the view she had the first time she saw them. (More from Shirley shortly.)

But what would it be like if the Rolling Stones — one of the most famous and storied rock bands of all time — held a concert, and nobody came?

It almost happened for their first Minnesota concert on June 12, 1964, at Big Reggie’s Danceland in Excelsior. The cavernous hall hosted what was reported to be fewer than 300 people — mostly teens — to see this unknown new band from England. One report even suggested the crowd to be only 50 people, until Danceland dropped the price from $6 to 50 cents later in the evening. The quintet played two sets, and
a good time was not had by all.

Before going too far, it’s important to understand this historic — and long lost — venue.

The building that would become Big Reggie’s Danceland was built in 1904 as the Beach Pavilion across Lake Minnetonka in Tonka Bay on the grounds of the Tonka Bay Hotel. There it served a range of purposes, such as hosting dances and roller-skating parties. In 1922 the hotel was torn down. That was expected to be the fate of the pavilion as well, but instead it was disassembled and moved to its final location at the end of downtown Excelsior near the lake. In 1925 it was connected to Excelsior Amusement Park when the park opened. It “felt like part of the park, but it wasn’t inside the park, where all the rides were,” said Shirley.

The pavilion offered a range of activities, often hosting bands such as Lawrence Welk and Tommy Dorsey. But by the fifties it fell on hard times with the hall used mainly for rentals. Enter Ray “Big Reggie” Colihan. In 1961 he opened Big Reggie’s Danceland in the former pavilion, featuring a big ballroom for dances as well as a piano lounge and 3.2 bar. The grand opening was May 25, 1961. The ad in the Minneapolis Tribune gives a good template for how Danceland first worked, with “Teenagers Only” Friday night and 21 and up Saturday night, admission $1. However, it soon became all teens when, being a “bottle club” — clubs where people brought their own alcohol — Big Reggie had to choose between dancing or drinking when the city changed its rules. That seemed fine to Big Reggie, who had found that there was more money in the teenage crowd.

In the early sixties, Danceland was the place to be if you were young. Perhaps Reggie’s greatest success was in 1963 when the Beach Boys performed for WDGY High School Night. Not only was it packed inside Danceland, the surrounding streets were teeming as well, and the police threatened to have the fire department turn their hoses on the crowd. 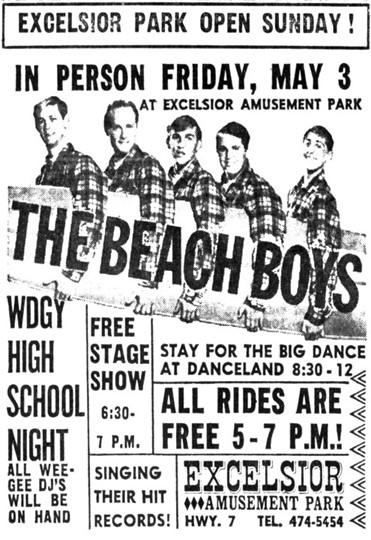 Flushed with this success, what next?

Big Reggie was looking for the next Beach Boys, so in 1964 he met with the Beatles in Chicago, but he turned them down. Seems he thought them just too risky and the band likely a flash in the pan. When WDGY reported this on air, it didn’t go over well with their fans.

Instead, Big Reggie bet on an another up-and-coming British band: the Rolling Stones. In 1964 they had one hit, “It’s All Over Now,” peaking out on the US charts at all of 26th.

Still, while one can assume Big Reggie wanted a full house, he also worried about a repeat of the near riot for the Beach Boys, putting his license in jeopardy once again. As a result, he did very little to promote the band.

Enter Shirley Nelson. Shirley, now of Bloomington, was there, as she and her friends were most Friday nights. “A high school classmate called me in the afternoon. Said she heard on the radio station an English band was coming to Danceland.” Shirley and her friends were 16- and 17-year-olds, and Danceland was the place to be. Her “brother and his girlfriend were going to Excelsior Amusement Park, so we’d have a ride there and back. So we went. It was already started. There wasn’t a lot of people — I’d say fifty, sixty people when we first got there.” After a while, “a few more people straggled in.”

She wasn’t impressed. “People were heckling.”

As opposed to the Stones of the future, they just stood there while they played, even Mick Jagger. Shirley also remembers that “they dressed a little different than we dressed here. Their suits were a different style.”

No riots this time. By the end of the night, attendance was estimated at around 280 people. Some say eggs were thrown at the band’s car as they left. Big Reggie reportedly paid them $2,000.

In sum, the Rolling Stones at Big Reggie’s Danceland was just one more night with one more band at a legendary — if short-lived — teen dance club. That is, if they hadn’t become one of the biggest rock bands ever.

However, if the rumors are true, the gig might live on through their music. Story has it that when Mick Jagger was in line at an Excelsior drug store, the man ahead of him ordered a cherry Coke. He was told they were all out. He turned to Jagger and said, “You can’t always get what you want.” The man’s name was Jimmy Hutmaker, or “Mr. Jimmy,” famed roving ambassador of Excelsior.

True story or a myth? Hard to say.

But we know what happened to Big Reggie’s Danceland. Big Reggie was done by 1967, and the building owner tried a few other formats, finally giving up and renting it out as storage in 1968. It ended sadly on July 8, 1973, when the big pavilion was destroyed by fire, the same year the park closed.

As for Shirley — who has since seen the Rolling Stones “four or five times” — that historic night she and her friends stayed until about 11, when she had to catch a ride home. Her review: “The music was decent.”

William Burleson is an author and lifelong Minneapolis resident. He is the founder of Flexible Press, Minneapolis. Learn more about him at williamburleson.com.