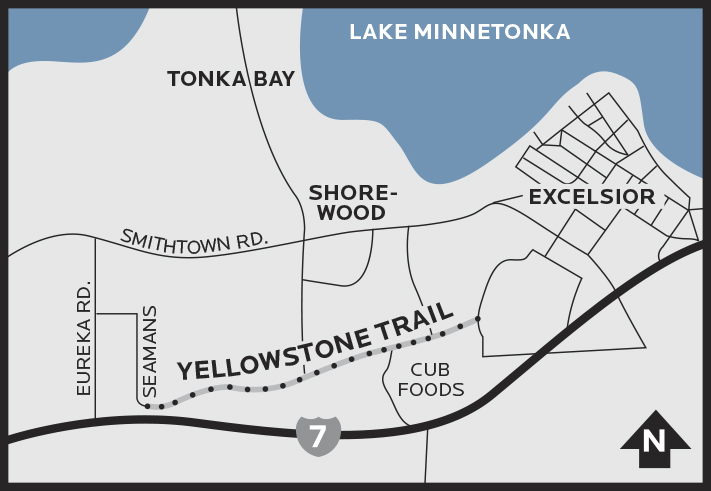 Come along with me, load up the Model T

We’ll take a drive on the Yellowstone Trail

We deserve a rest, let’s take a trip out west

Let’s take a drive on the Yellowstone Trail

While driving to concert bookings on Minnesota Highway 212 in the 1980s and early ’90s, I used to see markers for the Yellowstone Trail. I’d pass one of the markers and think, “Imagine taking this local highway all the way to Yellowstone National Park.” It got me thinking; what must it have been like to travel the Yellowstone Trail when it was originally built? What did it look like and feel like when automobiles still started with a crank? Late last fall, I had an opportunity to find out. There is an intact stretch of the Yellowstone Trail in Hennepin County that hasn’t changed much in 110 years.

At a little over one mile long, the 22-foot-wide patched pavement is surprisingly bare of modern-day road paint markings. There are no center or fog lines. A stone wall along the road looks like something out of a movie depicting the 1920s. Pull the brim of your cap or fedora down over your eyes, and no matter what you are driving, you might feel like you’re well back in the last century. 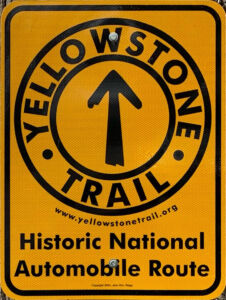 History of the Trail

The Yellowstone Trail, which passes by Yellowstone National Park on its way to Seattle, was established in 1912. It originated in North Dakota and expanded east and west, until it formed a collection of local existing roads and communities that spanned from Plymouth, Massachusetts, all the way to the Pacific Ocean.

No pavement by the trail association was poured or laid down, in contrast to today’s interstates.

If a local community wanted to be part of the Yellowstone Trail (it eventually grew to 8,000 members) they pledged to keep their part of the trail — their own local roads — in passable shape. So “a good road from Plymouth Rock to Puget Sound” as the trail slogan promised, remained true to any intrepid motorist willing to take on the journey.

When horses were still a very likely mode of transportation, and the average length of a trip for Americans was less than 10 miles, the idea of making a trip through 14 states was fantastic.

The Yellowstone Trail was the first transcontinental highway in the nation. It was followed by the National Old Trails Road (1912) that remarkably followed the route of the old covered wagon Santa Fe Trail and the Lincoln Highway (1913) that went south of Minnesota.

Back then, national routes had names, not route numbers. That all changed in 1930 when the federal government stepped in and started numbering the major routes, bracketing the heyday of the trail from 1912 to 1930.

The national office of the Yellowstone Trail, originally in North Dakota, was relocated in 1918 to 520 Nicollet Mall. Back then it was known as the Andrus Building; now it’s called Renaissance Square. Constructed in 1898, it is one of the oldest surviving buildings in the heart of downtown Minneapolis.

Michael J. Dowling became the trail’s administrator in 1918. Dowling lost both legs and most of his left arm at 14 years of age to frostbite incurred in the Blizzard of 1880. The operation — done on a kitchen table — was so extensive the doctors did not think Dowling would survive. When told this after he came to, he reportedly said, “You liars! I’ll live longer than either of you!” Dowling went on to be a speaker of the Minnesota House of Representatives and have a Minneapolis school named after him.

Dowling used the trail in 1913, traveling from St. Paul to Yellow­stone National Park with his wife, Jennie, and their three children. When he assumed the top job at the association five years later, he knew full well how to find the Yellowstone Trail and stay on it.

Yellowstone Trail — famous for its accurate road conditions and maps

Indeed, the directions from the Nicollet headquarters were quite precise: “[Follow] Nicollet Avenue and drive south to Lake Street. Turn right on that street following trunk Highway 12 past Lake Calhoun and the city limits at the end of the brick pavements. This highway is known as the Yellowstone Trail . . .”

Yellow was the official color of the trail and a driver moving at a speed “that would not scare horses drawing carriages” relied on yellow bands painted around trees, telephone poles, and barns, as well as rocks painted yellow. There was no highway signage. As a child on the Wisconsin part of the Yellowstone Trail, Aronoldine Gulcynski recalled: “I remember being interested in the Yellowstone Trail when I was a young girl. My father loved to go on Sunday drives and would point out the yellow bands around telegraph poles that marked the trail.”

How good was the trail? The War Department in 1916 used the Yellowstone Trail to carry a message “faster than any train” from Plymouth, Massachusetts, to Seattle in 120 hours. Contrast that with Dwight D. Eisenhower’s 81-vehicle convoy using the Lincoln Highway in July 1919, which took 69 days from Washington, DC to San Francisco, a distance of 3,242 miles. The Yellowstone Trail was longer at 3,719 miles.

Here are your “time travel directions”

If you are coming from Minneapolis, start at the junction of Seamans Drive and the Yellowstone Trail just off Highway 7 in Shorewood. Follow the road as it winds past the former Minnetonka Country Club. Gentle hills and curves and shady scenery evoke a time when auto travel was slow and scenic, so take it easy! The section of trail ends when you cross Glencoe Road in Excelsior, where it is renamed Academy Avenue, and soon after you’ll find yourself back in present-day Excelsior.

And where have all those Yellowstone Trail signs gone?

Put on your flashers: The drive is the destination — except maybe for a photo with the sign! There is remarkable interest in the Yellowstone Trail along its entire length. Enjoy this small section of nostalgia remaining in Hennepin County. To visit the former national headquarters at the Andrus Building (now Renaissance Square), park near 5th and Nicollet in Minneapolis. 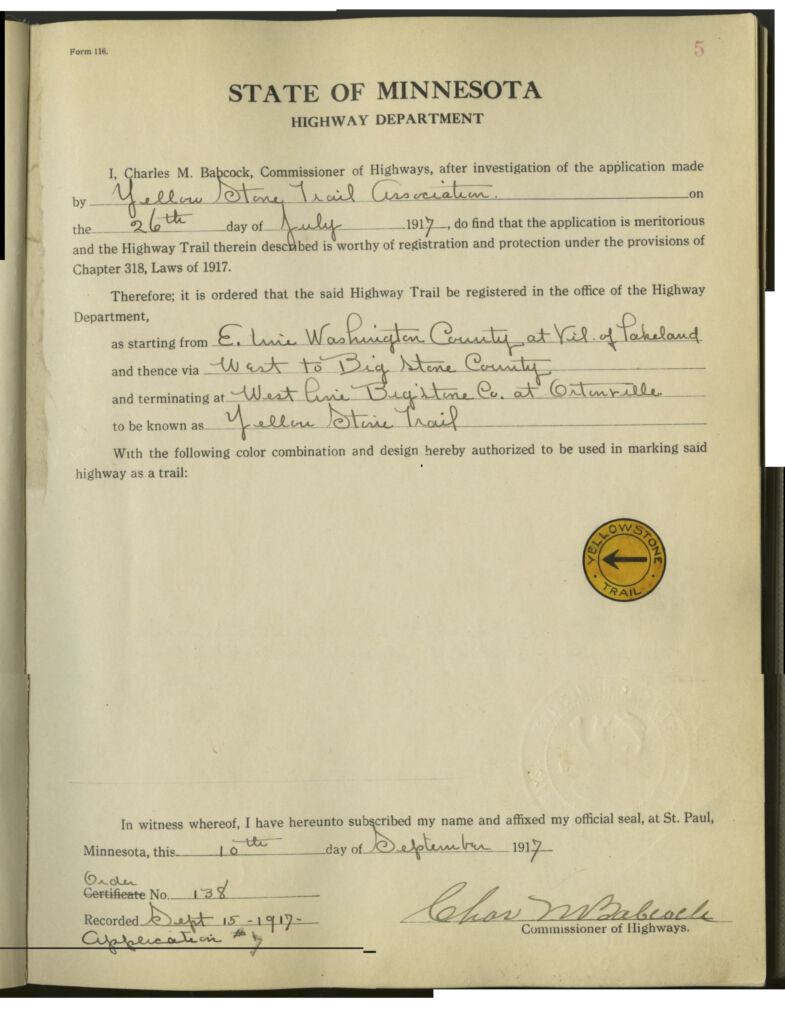 Charlie Maguire is a songwriter and performer who makes frequent stops to sing and typewrite stories in Hennepin County. You can follow him on Facebook or Instagram at charlie_studio_California. Photos provided by author.

• “The Yellowstone Trail in Carver County,” 2017 by Vicki Albu

• “The Epic Road Trip That Inspired the Interstate Highway System,” 2016 by Christopher Klein.