From the Magazine: Tales from the Terrace 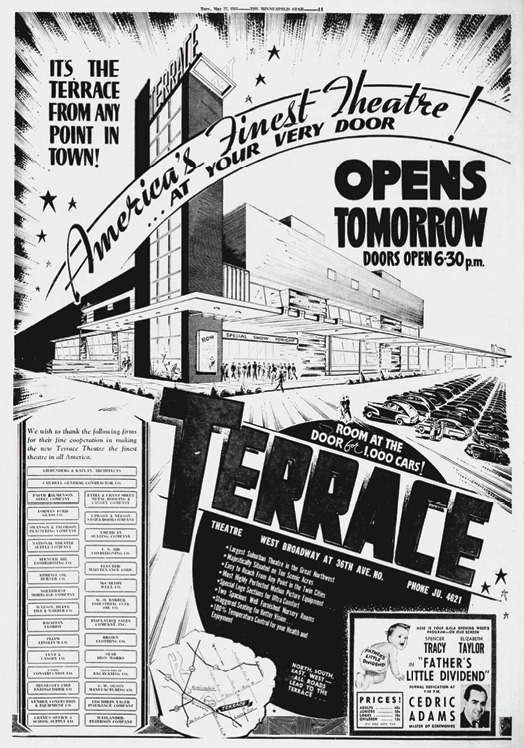 This article was originally published in Hennepin History, 2021, Vol. 80, No.1

The Terrace Theatre in Robbinsdale was open for nearly 50 years. Hundreds, if not thousands, of people worked there during that time — and made lasting memories, many of which they still recall decades later. Two former employees, Marian Braun and Pauline Ficker recently shared some of their favorite memories from their times working at the Terrace.

In 1955, Pauline’s mother had driven her to the Terrace so she could apply for a cashier position. As they pulled up the drive, Pauline was amazed by the sight: the Terrace, lit up against the darkening sky, was magnificent and could be seen from all around Crystal Lake. It had been a long day applying for various jobs. Her mother was tired, and wanted to be done for the day. “Just one more?” Pauline asked, and her mother relented.

Pauline was interviewed by Bill Ficker, manager of the Terrace. Bill did everything he could to make the moviegoing experience truly special. From making sure the theater was immaculate, to ensuring the concessions were the best offered, to even saving a choking boy, it was all a day in the life for the Terrace manager.

Pauline was hired by Bill. Not only did she get the job she was hoping for, but she also met the love of her life. While working at the Terrace, Pauline and Bill fell in love and were married. Two of their coworkers, Katie Barras and Phil Merlin, were even in the wedding. Pauline and Bill were happily married for 57 years. As Pauline said, “Just think . . . if I hadn’t gotten out of the car.”

Marian attended her first movie at the Terrace in 1955. In 1961, when she moved to the area, she was excited to be hired as a cashier. She had previously worked at the World and Riverview theaters and could tell that the Terrace was something special. The shine never faded, and Marian worked there until the late 1980s. In that time, Marian collected a lifetime of memories.

Marian recalled owner Sidney Volk, who worked at the theater almost every day. She remembers Sidney as a man who wanted to make sure everything was perfect. Much like Bill Ficker, Sidney was very in tune with the experience the audience was having. Sidney’s driving force was his pure love for the Terrace. It just had to be the best it could be.

During her years at the Terrace, Marian had the opportunity to make memories with some of the celebrities that came through her doors. Rod Carew was a frequent visitor to the Terrace, although she remembers that her manager could never keep Carew’s name straight. One night, while the New York Yankees were in town for a series, she was able to speak with Reggie Jackson and some of his teammates who were visiting incognito. And, of course, she could tell you a story or two about Minnesota’s own purple royalty, who was known to visit the theater on a regular basis.

While working at the Terrace, Marian made several lifelong friends, and they get together when they’re all in town. One of the recent reunions took place at the St. Michael Cinema, where Marian is happily selling movie tickets to audiences once again.

The Terrace truly was a magical place. You really never knew what could happen when you walked through those glass doors. For some people, it was just a job they had when they were younger. But for others, the Terrace would change their lives in ways they couldn’t have imagined at the time. For Pauline and Marian, and so many others, there will never be another Terrace. The only place the Terrace lives on is in special memories like these, which is exactly why they need to be preserved.

David Leonhardt met future wife, Alysia, while they were working at the Terrace in the early 1990s. In 2014, they formed America’s Classic Cinemas, devoted to preserving movie theaters through photography and memories. In 2015–2016, they led the fight to save the Terrace. After the demolition in 2016, together with the Robbinsdale Historical Society, they formed the Terrace Legacy Project to ensure the Terrace is never forgotten. For more information, visit americasclassiccinemas.com.