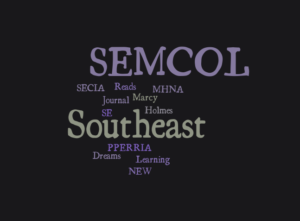 Southeast Minneapolis Council on Learning had a formula for better education that looked like this:

(SEMCOL)NEW+LD+SEREADS=BE or SEMCOL/NEW+LD=BE. Math was not my forte, but one of those statements must be true.

The SEMCOL records are currently being processed and organized to be added to our archival collection through a Legacy Grant funded by the Clean Air and Water Fund. Out of the gate, we came across a lot of acronyms we had to make sense of. We unpacked these first:

SEMCOL – Southeast Minneapolis Council on Learning was made up of 3 neighborhood organizations:

The board was comprised of 4 members from each of the neighborhood associations above.  The board steered the organization toward the purpose of improving education in the Southeast by focusing on the education of the entire family.

As early as 2002, the Southeast Learning Council began a plan to reach more kids.  Don Fraser, President, was so impressed with the attendance and parent participation at Pratt Elementary that their success story became the programming model for what would soon be Southeast Minneapolis Council on Learning.

Fraser noted that Pratt had 100% participation from parents, which correlated to students’ perfect attendance and better performance in school. When SEMCOL formed, it focused on 2 initiatives to bring about this change in the school system: Learning Dreams and Southeast Reads.

2) Southeast Reads –a summer reading program designed to foster reading in families of pre-school children.  The program collected and distributed books to young people in Luxton and Van Cleve community parks.  When the local newspaper Southeast Angle got involved in the program, they featured resident essays and art.  Later, the newspaper published short reading selections they thought would appeal to a “diverse” Southeast population in Southeast schools.

The organization banked on the community taking ownership in educating youth. Not only did they enlist parents, but they put their money where their mouth was. PPERRIA came through with SEMCOL’s initial funding, which was soon matched by The Musser Foundation.

SEMCOL moved quickly in its first year, securing funds and people to do the outreach that was so important to plant the seeds of their idea in the community. The Learning Dreams project was one of the first introduced. It required a neighborhood education worker (NEW) to visit neighborhood parents. NEWs focused on parents and their learning goals by referring them to services to meet their needs. This is what the NEW facilitated in the Learning Dreams program:

As a result of their efforts, NEWs observed situations in which “parents who had a support person became more supportive of their children.”  On one level, that support might have involved finding housing for parents so that their children could remain in school or assisting with gas money so that a parent could get to work.  SEMCOL’s records  also gave accounts of stories in which the program helped parents get into their own educational or career programs.

NEWs were also important to the SE Reads program by driving the book collection and distribution. The program distributed thousands of books in the first 2 years of the program and their records show they continued to do so into the 2010s.

SEMCOL believed that the institution should play a role in education and with that in mind sought to establish a couture of learning in the Southeast. The organization had good roots and great intentions in their community learning approach but found that the glue that held it all together was the expectations set by parents for their children.  If you’d like to know more about SEMCOL, please contact us at research@hennepinhistory.org.