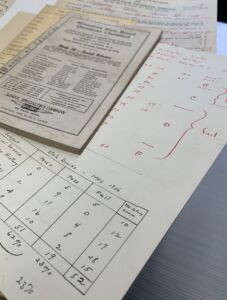 There was a popular song in the early 90s called “Let’s Talk About Sex.” Needless to say, the music video got a lot of attention, but the song wasn’t bad either. It held up because the premise made sense – sex is part of being human, why not talk about it – what’s the hang up? As it turns out, a lot of folks have hang ups. Unfortunately, that’s also part of being human. An added bonus to being human, especially in these United States is to confront the idea of race at some point in one’s life.

I have written this a few times before, but we all know that race is a construct, not an actuality. There is only one race that we know of on the planet and that is human. But a long time ago, some wealthy colonizers, the haves, who didn’t want to risk losing their wealth (or their lives), decided it was in their best interest to prevent the have nots from getting together and taking power from the haves. So laws were passed that forbade marriage between enslaved or formerly enslaved persons, “black,” and people of European descent, “white”, with native people thrown into the mix. I skipped the part where the Catholic Church endorsed slavery and decreed that it was okay for Christians to take the lands of native people, which was what got the colonizers going in the first place.

What does this all have to do with sex (ed), critical race theory (CRT), or HHM? I’ll work backwards.

We have recently finished processing the Milton Schadegg Collection. Schadegg was a seemingly beloved history/social science teacher at Central High School in the late 30s, early 40s. His students looked up to him and referred to him as “Milt”. He was the cool teacher – the yearbook advisor for the majority of his tenure, and first aviation science instructor at CHS. The collection includes Board of Education correspondence and state board questions for social science. Schadegg’s U.S. and world history tests and quizzes are also included, as well as some answer keys and student papers. Schadegg’s own Harvard graduate school papers, which are also included, detail a connection between the theories he gravitated toward in his own education and the ones he passed on to his students.

Schadegg’s notes detail 2 competing schools of thought (John Dewey & Franklin Bobbitt) with respect to how the student’s mind could be shaped by curriculum. Schadegg saw Dewey as representing “the new way” of teaching, and Bobbitt as the old. Dewey was practical and Bobbitt, theoretical.

Schadegg’s simple distinction with respect to the 2 ideas about curriculum was that the “content grows out of the experience of the present” in Dewey’s camp, while “content grows out of the experience of the past” under Bobbitt. So if we look at sex education for example, Schadegg leans toward Dewey, concluding that there should be a “mixing of the sexes in classes as well as social and extracurricular activities” when it comes to dealing with the physical differences of young men and women in the classroom. With respect to teaching the birds and the bees, Schadegg, recognizes the “limits of the curriculum” as a problem since the actual education, the “harmonious development of all our faculties,” called for tools the teachers simply didn’t have at the time. He highlights that “sex education is only character education.” 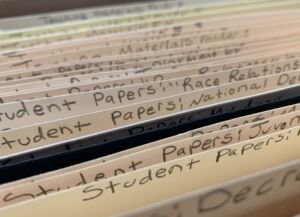 Sex Ed was just one of the social issues Schadegg tackled in his social science courses. He also dealt with alcohol, marijuana, divorce, and many other modern social problems. Lumped in with the social issues was “The Negro” as a topic for discussion and essay. I know this was painful for Henry Warfield, one of the handful of African Americans in the senior class of 1939, whose senior quote was “He may lose his heart, but never his head.” Unfortunately, none of Henry’s papers were found in the collection. Neither were those of Geraldine Davis, another African American student in the 1939 graduating class. I can’t imagine being in a classroom where a teacher spoke about me as a social problem. The scary thing is that at that time (and even now), there is either no curriculum that talks about what led to these ideas being taught in the classroom or there ARE these ideas that get taught year after year, after year… One would think there should be some curriculum -(CRT)- so that teachers might get an understanding -(CRT)- and stop doing students a disservice in the classroom when it comes to American history -(CRT)-.

I’m not suggesting that Schadegg should have used CRT curriculum because it wasn’t talked about until the 1970s, also, the country wasn’t ready for it. But looking at the tests, quizzes, and papers in this collection, one can see how skewed education was with respect to US history. Slavery happened and now all “black” people, except for George Washington Carver, are a problem for “white” society. An accurate oversimplification based on the test questions and answers.

This high school teacher took time to update his thinking about how young women and men should be taught about sex in the classroom, but neglected to update his perspective on how people of color were intrinsic to United States history as well as society. Instead, he passed on questions from the Board of Education exams like this: “In the US, the crime rate is highest among _____.” “The increase in crime is due chiefly to_____.”  Perhaps Schadegg knew nothing of the US government practice of redlining that began in the 30s, but it’s doubtful that he would have piped up without some kind of curriculum to support his teaching. If there was ever a collection that made a case for critical race theory, it was this one.

For the record, the common sense part of critical race theory is that “American society must take into account its history of racism and how it shaped its attitudes and institutions.” (Bloomberg)

As in the case above, CRT offers an opportunity for a deeper understanding of not only “black history,” a shared history, and the racism that is embedded in American society and institutions, which we all navigate whether we notice it or not.

This collection is a good example of the work we’ve been trying to do at HHM. That is to be honest in looking at our history, illuminate the good, the bad, and the meh, so that people can get a full understanding and the option to educate themselves further (or not).

We won’t all turn to salt if we look back critically, but we will see a better way forward.

Baird, R. P. (2021, April 20). The invention of whiteness: The long history of a dangerous idea. The Guardian. Retrieved December 28, 2021, from https://www.theguardian.com/news/2021/apr/20/the-invention-of-whiteness-long-history-dangerous-idea

Hatzipanagos, R. (2021, July 21). What the founders of Critical Race Theory have to say about the conservative attacks. The Washington Post. Retrieved December 28, 2021, from https://www.washingtonpost.com/nation/2021/07/22/critical-race-theory-founders/