One of the biggest blockbuster movies before the pandemic crept up on us at the end of 2019 was Endgame. Oh-and let’s not forget The Joker. I’m too scared to watch Joker, so I’m just going on Rotten Tomatoes (ratings) that both films were well acted by those at the top of their profession, and they were fairly well written. If we break it down, every movie has its beginning, middle, and end; each has to have a hero and villain.

Over the past couple of months, the archive has been processing a blockbuster collection with a film-worthy cast of characters, complete with a hero and a villain. The John Jamieson Collection, processed with Legacy Grant funds made available from the Clean Water Fund, consists of highway documents, maps, and reports from Jamieson’s personal papers. 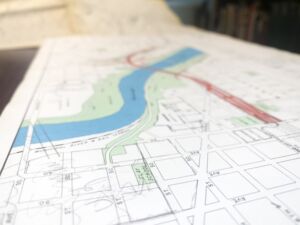 Our hero is Wisconsin-born John Rodney Jamieson, who came to Minnesota to get a Masters in mechanical engineering at the University of Minnesota and later joined the service after graduation. He did a 2-year tour in Italy (1943-1945) in the Air Force and left as a 1st Lieutenant. Meanwhile, the war gave rise to the 1944 Federal Aid Highway Act, often mis-referenced as the Defense Highway Act of 1944, marking the beginning of a major highway network, authorizing $10M in federal appropriation across states to build a system of roads across the country much like Germany’s.

Fast forward to the early 50s and Jamieson is out of the service, has found his one and only wife, Ruth Sundstrom, and has got to work on raising a family in Prospect Park. Enter Dwight D. Eisenhower and the Federal Highway Act of 1956.  Eisenhower rode the momentum of his popularity in his 2nd term, to create NASA and sign the Civil Rights Act of 1957, the first civil rights act since 1875.  One of the things that garnered high public opinion in the 1st term was the Federal Highway system. The Defense Department tasked state Highway Departments to select a route /network that would connect major economic and population centers in their states.

The state found that the river crossing between Washington Ave and the Franklin Ave bridge would accommodate the most traffic. Prospect Park and East River Road Improvement Association (PPERRIA), one of the oldest neighborhood associations in the city, had something to say about that, as they would soon be bound by interstate if they didn’t.

As it happened, our young engineer was very involved in PPERRIA. The John Jamieson Collection is packed with correspondence about the organization’s objections to the placement of I-94, 35W, and even 280 as it related to Prospect Park. The documents tell the story of an everyday guy who uses all of his skills against the Highway Commission to stop them from destroying his neighborhood. Our hero’s weapons were letters. He held the highways back with a typewriter, onion skin paper, and his signature – phrases like “We must remind you…” and “We question the adequacy of…” loom large on the page.  These were the words that bought time for Prospect Park. He got the attention of the MN State Highway Commissioner, the Federal Highway Commissioner, Hubert Humphrey, Arthur Naftalin, and Don Fraser  These were letters to the right people – like the Federal Hwy Commissioner, the MN Hwy Commissioner, These were letters in which Jamieson presented a plan and proposal alternate to the one proposed by the Highway Commission to save his neighborhood from ruin. He sent it freely and often to make sure everyone was on the same page. He proposed the Prospect Park Plan or railroad route 1 as a solution. By his calculation, 1 mile of freeway cost $1M.  Jamieson estimated the cost of construction for the 3 highways around his neighborhood to be $30M, with the added bonus of reduced access and removal of homes.  So Jamieson devised a plan that saved homes AND $5M, however, it wasn’t considered as an option.

As doors started to close on Jamieson’s proposal, our thinking hero followed the money. He was moved to ask Humphrey to investigate the freeway program because they didn’t care about spending a few extra million dollars, and after Humphrey said he had to “go with the majority,” Jamieson wrote to H. Carl Anderson about a “problem with excessive spending and a lack of planning” in the highway department. Neither of these efforts gained traction, but it was all Jamieson could do to to keep fighting.

In March of 1960, a Congressional hearing was held regarding the highway proposal.  It’s around this time that Jamieson becomes the Chairman of PPERRIA. He battled the Highway Commission from 1956 until 1960, but eventually, the plan proposed by the city was approved by the City Council Council, the Mayor, as well as the state and federal highway commissions. Jamieson tried to defend his neighborhood from 35W in much the same way, but took another whooping.

Years later, Jamieson and PPERRIA went up against Gopher Oil to clean up contaminants left at their site and slayed that giant.

Jamieson was a frequent visitor of the fireside chats held at Schneider Drugstore on University Ave. The store at 3400 University Ave, was owned by Tom Sengupta, a pharmacist who fostered an environment for conversations on inclusive politics around a wood-burning stove at the heart of his store (more on Mr. Sengupta in another post).

Our hero went on to serve the state in the position of Minnesota Highway Commissioner from 1965-1967.  He was appointed Deputy Federal Highway Administrator in 1967. He was the Deputy Commissioner for New Jersey in 1978.

Well, true believers, our hero persuaded oil companies and held off a highway with his typewriter!  He didn’t win the highway battles, but he did live to fight another day. Who knows how many neighborhoods he saved at his posts as highway commissioner.