It has been a very busy summer and early fall at Hennepin History Museum. Our project to produce a Historic Structure Report (HSR) passed the 75% milestone as required by the grant requirements and is scheduled for completion by the end of November. (We’ll be sharing the highlights with you in 2019 as we celebrate the 100th birthday of our building!) We’re happy to report that no significant structural issues have been found, which has been a huge relief! Our building has proved to be solidly built and well designed.

Many non-emergency repairs in the building have been put on hold as we continue to work on this report. But we have had to address two emergency situations this year:

Many of you heard about the roof leak which caused us to close for two days in September. Although our roof is in good shape overall, we have had an ongoing issue with small holes around the main drain which have been causing some deterioration of the plaster in our main staircase. Our HSR team identified those holes earlier this summer, but normal rainfalls were not causing any significant issues until September.

You may recall the large amount of rain we received around the 19th and 20th of September. When the staff arrived on the morning of the 20th it became clear that those tiny holes became a very large problem, causing a pretty significant leak near our main stairway. 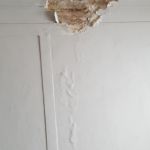 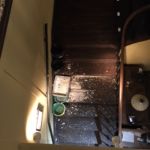 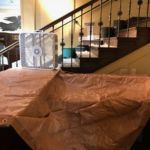 Mint Roofing was quick to respond and came out during the deluge to do spot fixes which immediately stopped the leak. But we did have to wait an extra day to allow the plaster to dry somewhat and to clean up the mess left behind before we reopened the building. Mint Roofing came back again the next week and did a more extensive patch job that will ensure these leaks will not come back. We want to thank Mint Roofing for the timely response to our crisis! 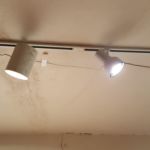 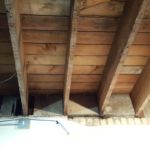 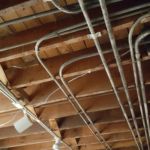 Additionally, there was the issue with our basement hallway ceiling which developed a large crack. We were advised by our HSR team to remove the plaster as soon as possible as it was a safety hazard to staff and volunteers who used the hallway to access our storage areas on a regular basis. After the plaster was all removed, we were told that that section of ceiling was thicker than normal and weighed at least a ton: plaster and metal lathe weigh a lot!

We thank all of you who contributed to our building fund and helped us complete these repairs!

The HSR team, which includes architects and designers from Collaborative Design Group, have been invaluable advisors and teachers when it comes to our building. And some good did come out of both of these emergencies. Both exposed the underlying structure of our building and helped us to better understand how it was constructed. The HSR that is produced from our partnership will provide very important information about our building, and allow us to plan our next repairs and improvements to ensure the building will serve our organization well into the next 100 years.

The Historic Structure Report project has been financed in part with funds provided by the State of Minnesota from the Arts and Cultural Heritage Fund through the Minnesota Historical Society. Thank you, fellow Minnesotans, for supporting arts and culture through the Legacy Amendment!