A tour of the collections of the Hennepin Medical History Center

Go back in medical history by visiting this nearly hidden archive embedded inside the bustling Hennepin County Medical Center (HCMC) complex in downtown Minneapolis. Hennepin Medical History Center first materialized when two hospital staff members toured the empty halls of Minneapolis General Hospital after it had moved its facilities into new buildings. They developed a plan to save its history and officially opened as a museum in the basement of HCMC in 1994.

Two collections fill the archives: one has objects and documents from St. Barnabas, the Swedish Nursing School and Hospital, and Metropolitan Medical Center. The other is made up of items from Minneapolis General Hospital and HCMC.

Visitors will find a bed occupied with a patient much like it would have been from the 1920s to the 1950s. The head of the iron-frame bed used a support that had to be lifted by nursing personnel to reposition the patient. Also on display is a Wangensteen gastric suction device, designed by Dr. Wangensteen of the University of Minnesota in the early 1900s and believed to be the first gastric suction system. All tubing for the suction and IV were reusable. The blood transfusion has a cheesecloth filter to collect any clots. Also in the exhibit are a centrifuge hot packer used for the Sister Kenny hot pack method to treat polio, the first organ transplant carrier, and many other medical items, instruments, and historic photographs.

Rounding out the museum are early medical books; nursing school uniforms and pins; laboratory items; a military poster asking women to join the armed services, especially as nurses; and women’s uniforms from every branch in the United States military.

The worldwide coronavirus pandemic has created a spotlight on medical professionals. This museum honors their history. 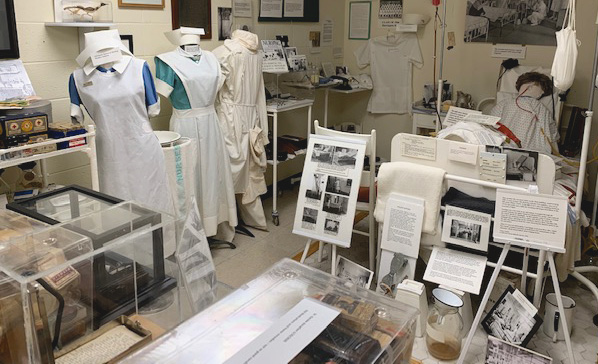 Carol Oeltjenbruns is a graduate of Fairview School of Nursing. She was employed at several metro area hospitals before joining Hennepin County Medical Center in 1976, where she worked until she retired in 2007. Since then, Carol’s been a volunteer at Hennepin Medical History Center where she’s researched and developed several exhibits and given presentations in the community about medical history and the Sister Kenny Institute in Minneapolis.