From the Magazine: Water travelers 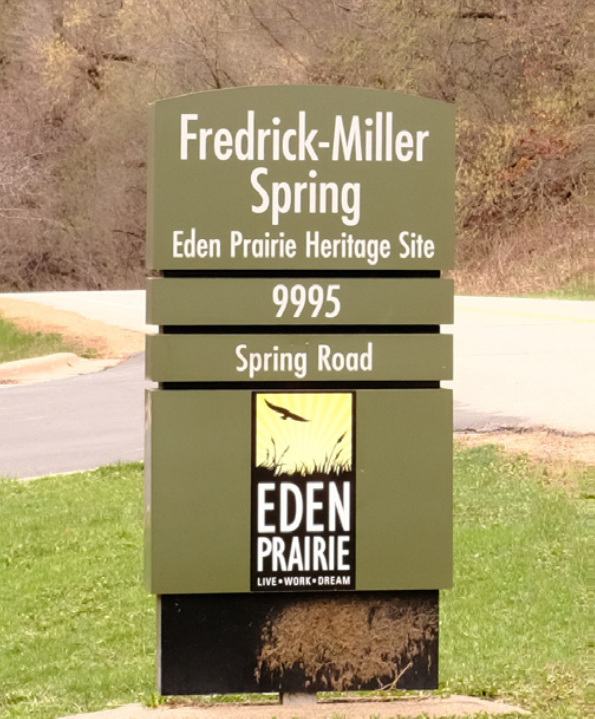 I grew up where the drinking water never tasted good. Our well water was so full of minerals that we mixed Kool Aid (without sugar) to mask the flavor when we quenched our thirst out in the hay field. Once, I remember going across the road to the neighbors because their well water was sweet. I took a gallon jug and filled up outside and brought it home. That was the start of my “water traveling” and I’ve been traveling ever since. That’s why I understand people who frequent the Fredrick-Miller Spring in Eden Prairie. As I pulled into a little wayside that marks the spring, I could hear the sound of Riley Creek. Running water always sounds good. The cool, dark valley that forms Purgatory Bluff and the Prairie Bluff Conservation Area funneled the crisp sound of the little creek to my ears.

The popular spring has been delivering water for centuries, most recently via a 3-inch galvanized pipe. What water isn’t caught by containers people bring with them spills onto a metal grate boxed in on all four sides by a concrete trough. It provides a resting place for bottles — and keeps the steady flow of the spring off your shoes. William Fredrick and his farm partner Anton Kruger moved the spring from the west side of the road to the east side by digging a trench, diverting the spring to its present location. I’m guessing they did it because the steep valley wall where the spring reveals itself, doesn’t allow anyone to get out of the way of traffic on County Road 4 — then or now. The spring has changed little over time. The water is continually tested (and has had only a few citations). What changes is the area around the spring, but more about that in a bit.

But long before Fredrick and Kruger grabbed their shovels, Native people traveled here or water. The spring was known as Minewaucan or curing water. Eden Prairie pioneer Helen Holden Anderson wrote that when the usual home remedies failed to take hold, sickly folks came down to the spring. “One had only to drink deep and often of this,” she wrote of the water, “and the sparkle would return to one’s cheeks, strength to one’s limbs, and laughter to one’s ribs.”

Modern medical science may differ with Helen, but her words certainly described the people I met that day. A man in a truck loaded with huge blue containers traveled from Elk River. “It’s a hundred-mile round trip once a month,” he said, “and I’ve been doing it for years.” He smiled and kept filling five-gallon jugs one after the other. Then without visible effort, he hoisted the containers, weighing upwards of 40 pounds each, back into the pickup, all without a break. It was impressive. After he left, there was a brief lull, until the next car pulled up. This time with a family. The rosy-cheeked kids got out and played down by the creek like they’d been there many times before. “We drive over from Saint Paul,” one of the grownups said as she slid a recycled milk jug under the pipe. ”We could go to the Schmidt Brewery, which is in our neighborhood, but they charge you there. Here we can fill up for free then take the kids hiking.” I nodded in agreement. A trail over the creek leads to a pretty bluff. The other thing she said she liked as she glanced at the road was, “We meet the same people here over and over. Like there’s this happy guy who drives a long way with his pickup full of blue water jugs.” “You just missed him,” I said. And on and on the water travelers came. The spring runs day and night with water that “tastes like oxygen, tastes like air,” another spring fan said.

The Minnesota Department of Natural Resources (DNR) estimates the state’s springs total between 15,000 and 22,000. DNR Fisheries has in its possession a linen map measuring 5 feet by 2 feet fivefoot that Thaddeus Surber, an aquatic biologist, put together in 1922. He started the whole survey and the hunt goes on to fully document even more locations online. If you think you’ve come upon an undiscovered source, enter your observation of where the spring is on arcgis.dnr.state.mn.us/gis/CitizenSprings/. There are some handy photo examples to aid your identification too. Springs, the DNR cautions, may not look like the one at the Fredrick-Miller site. That latter name, by the way, comes from Arthur Miller who acquired the pipe in 1968 and donated it to the City of Eden Prairie a year later. The city kept up improvements that you see today and declared the spring a Local Heritage Preservation Site in 1997.

The fate of the spring
Some water travelers who visit the site are seriously concerned about a new planned development of 50 or so homes on a property that touches Fredrick-Miller Spring’s land. They fear the water’s quality could be compromised as a result. The Friends of Fredrick-Miller Spring is urging further study and the fate of the spring has yet to fully play out. For many, traveling for water will continue. Some of us will always be water travelers, continually seeking a finer vintage than we’ve experienced in our childhood or elsewhere. In this case, the Fredrick-Miller Spring has not only enjoyed a sweet-tasting legacy, it’s also been a place to quench a historical thirst and to find serenity and quiet space in a rapidly encroaching world. 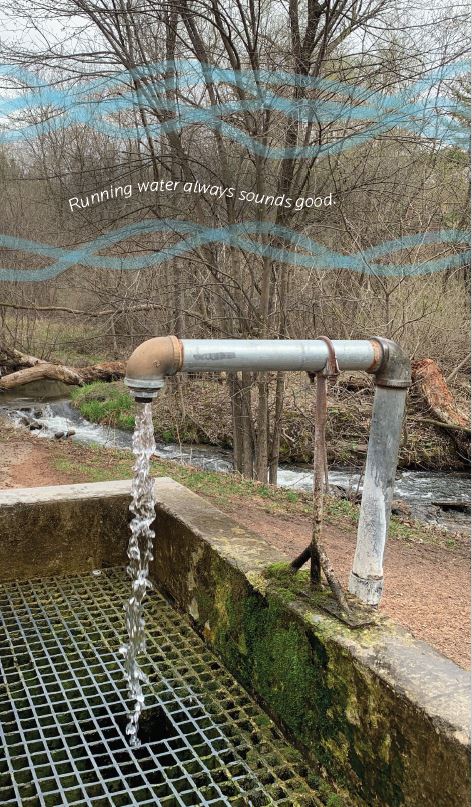 Charlie Maguire is a traveling songwriter and musician who makes frequent stops in Hennepin County to listen to water.

PUT ON YOUR FLASHERS:
Fredrick-Miller Spring has parking for about eight cars. If you are not getting water but just looking around, drive past the pipe and park as near to County Road 4 as you can, to allow water travelers to pull in closer to the spring.