From the Magazine: Native dugout canoes

By Keith B. Anderson 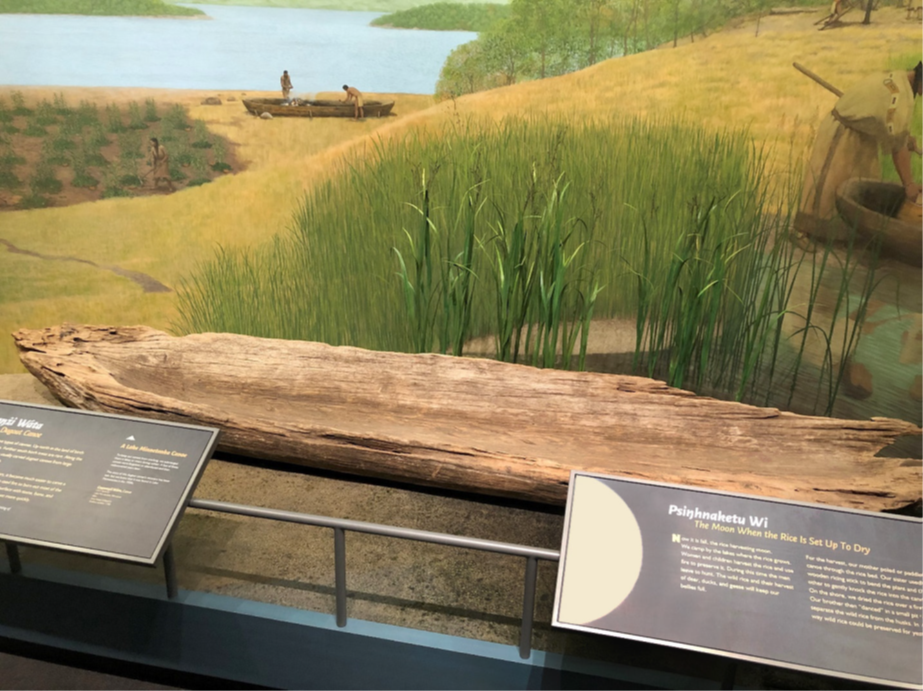 Since first opening its doors in July 2019, the Shakopee Mdewakanton Sioux Community’s Hoċokata Ti [ho-chokah-tah-tee] cultural center has provided the tribe with an important place to gather and celebrate their heritage. The cultural center features a public exhibit, Mdewakanton: Dwellers of the Spirit Lake, which tells the history of Mdewakanton Dakota people from the tribe’s perspective, something that is highly unique in museum settings.

When visitors walk through the center’s exhibit, they learn about the history of Dakota people through a series of displays of cultural objects, from Native regalia to artifacts from pre-contact periods to a caramel-colored dugout canoe. Like all great museum objects, the canoe has a rich history dating back hundreds of years. Long before the advent of crisscrossing freeways, freight trains, and light rail lines, Native Minnesotans — including Dakota people — used canoes to travel along river tributaries, fish, and gather rice. Waterways have long been important to the Dakota, who settled villages near water, which is essential for sustaining life. These canoes were more than modes of transportation: they were lifelines.

From tree to transportation
Creating a dugout canoe was no small feat and required careful workmanship. Hardwoods trees like oak, basswood, or cottonwood were preferred because of their density and durable fibers. Traditionally, people chose readily available trees that had the best buoyancy qualities. Interesting enough, the canoe on display at Hoċokata Ti is made of white pine, a soft wood, not in abundance near Lake Minnetonka, where the canoe was recovered. While more susceptible to rot than an oak-based canoe, white pine is lighter and easier to work than a hardwood. Nevertheless, the canoe is heavy — it took six staff members to bring the piece into the exhibit.

Only one other canoe has been discovered in Lake Minnetonka, according to the Maritime Heritage Minnesota Dugout Canoe Project Report, completed in 2014. In that report, the other Lake Minnetonka canoe is referred to as the Lake Minnetonka North Arm Dugout Canoe (21-HE-438). The description provided by the original collector for the canoe in the Shakopee Mdewakanton Sioux Community’s collection reads: “An old Dakota dugout canoe. It was found stuck in the mud at the bottom of Lake Minnetonka in the 1930s.” Dugout canoes were also discovered along miles-long rivers and lakes in the Minnesota River valley throughout the 1900s.

Creating dugout canoes
Native people used carefully controlled fire to hollow out the tree log. The maker would scrape out the burned wood with a shell or stone tool, then burn more wood, extinguish the flames, and scrape more. Crosswise cuts were made inside the trunk roughly a foot apart after the wood was properly seasoned, effectively splitting the wood lengthwise. Stone axes, bone knives, and clamshells were used to refine the design. The process took many days. More recently, metal axes have been commonplace to shape a flat bottom with straight sides. Long before freeways and freight trains traversed Minnesota’s landscape, hollowed-out canoes were important transportation and food-gathering vessels for Native Americans.

After creating a canoe with the proper shape and adequate carving for seating, the maker would leave the canoe to “season” throughout a drying and oiling process. Native people preserved their canoes for the winter by submerging them in water. Doing so seasoned and stored the canoe through the long, harsh Minnesota winters.

Carbon testing dates canoe to 18th century
The Shakopee Mdewakanton Sioux Community did carbon testing on the canoe to determine its age. This process involves extracting a small wood sample to be examined under a microscope and testing it using accelerator mass spectrometry. Minute detailing of this kind helps researchers identify the specific type of wood. The result of that testing found the canoe was most likely made between 1721 and 1818, making it relatively young compared with other dugout canoes discovered in the state.

Keith B. Anderson is the chairman of the Shakopee Mdewakanton Sioux Community.

What is it?
Hoċokata Ti (ho-cho-kah-tah-tee) is an important hub of heritage, language, and history. Museum exhibiting an assortment of traditional Mdewakanton Dakota cultural artifacts. Gift shop featuring a variety of Native-made art, music, beaded and quilled items, books, and craft supplies.

Meaning:
Hoċokata Ti means “the lodge at the center of the camp” in Dakota.