From the Magazine: Hennepin County Dialogue

A perspective from Augsburg University historians 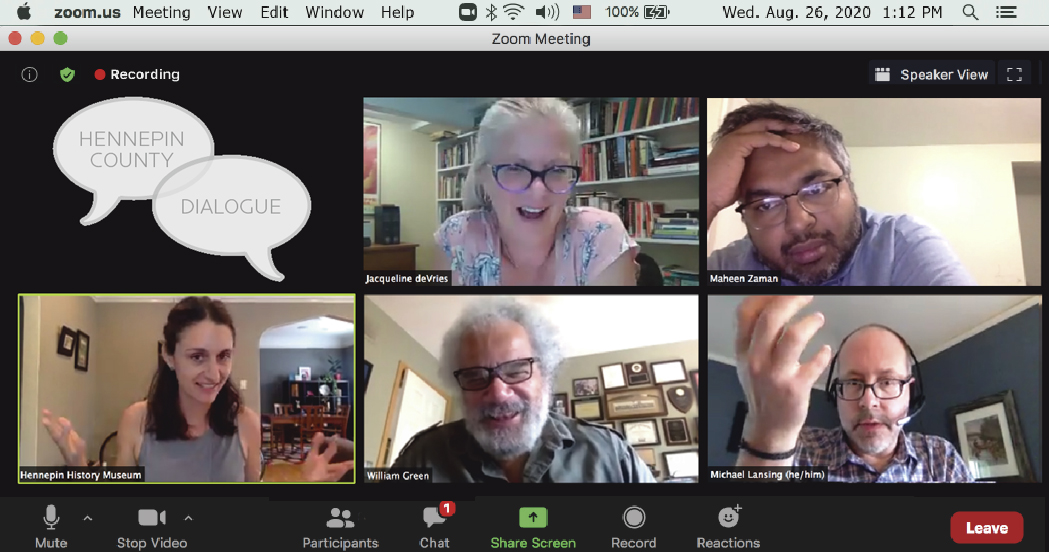 Augsburg University has a rich history going back to 1869 when it became the first seminary founded in America by Norwegian Lutherans. Today the liberal arts university in Minneapolis educates diverse students to be informed citizens, thoughtful stewards, critical thinkers, and responsible leaders. The university’s history department believes that studying our past contributes to our moral understanding, gives us a sense of identity, and is essential for good citizenship.

Hennepin History Museum’s public programs manager, Sophie Hunt, spoke with four Augsburg history professors about COVID-19, George Floyd, and why people should document their own lives for the benefit of future historians. The following is an excerpt of this discussion, the full text of which in published in Hennepin History magazine, VOL. 79, NO. 3, 2020 available on newsstands throughout the county, or here to receive this member benefit.

“We have to lay claim to the significance of what we do, each of us as historians, wherever we’re located, because this year is showing us that it really, really matters.”

HENNEPIN HISTORY MUSEUM:
A global pandemic, months of local and national and international antiracism protest, weeks until a presidential election — as a historian, what is the dialogue in your own head about what is going on here today?

MAHEEN ZAMAN: I’d love to ask a question for my American historian colleagues, because I don’t know much about this. The question I have is how do moments become movements? And how do movements endure and create lasting transformations in the context of American history and especially the 20th century?

BILL GREEN: Well, I think the key word you mentioned was “lasting.” In the middle of one of the George Floyd demonstrations, reporters would ask the question, “Do you feel like we’ve made progress here?” And I say, “That remains to be seen” — because I’m a guy of the sixties [laughs] and I’ve seen Black and white people hit the streets. Within a matter of years we have the election of Richard Nixon and Reagan and any number of other folks. And even within the Democrat party, an effort to sort of modify, moderate, or milquetoast policies that once put them in the vanguard of social change. I’ve seen that happen. So it was exciting this summer to see what happened, but true change, it remains to be seen. Many of us have experienced exciting moments in our lives, yet most people have not. I might also add that a lot of people, not just students, but adults, who are coming to the race issue for the first time, seemed to feel that it is the first time that happened. And it struck me that this is a real reason why we need to perhaps require everyone to take history courses [laughs] because the sense of perspective seems to go as far as one’s immediate experience. And I found that the only likelihood, the only people who tended to think, “Well, let’s wait and see what happens with all of this,” came from the students themselves (which I’m happy to say some of whom were my students), but not because of what we did in class They tended to be more skeptical, more reserved as to any kind of long-term change that would transpire, but that many people hoped would transpire. So this was an opportunity, I think, a learning opportunity for many people to be disappointed. When asked what constitutes systemic change — what are you looking for? Well,
I would ask reporters this question: “What do you define as systemic change? How do you know that we’ve got it?” They didn’t have the answers. And I attribute some of that feeling to a lot of our policy makers who haven’t defined what systemic change looks like either. So we’ve got a lot of work to do with regard to nurturing the next generation, it seems to me, and being a part of this discussion.

JACQUELINE DEVRIES: Could I ask a question, Bill? You sound a little pessimistic. Historians are known for sitting on the fence, for always waiting and collecting and reflecting and withholding judgment until we need to make a judgment. But, at this moment, you sound like a pessimist rather than an optimist about the potential for change. One quote that’s been thrown around a lot is Martin Luther King’s: “The arc of the moral universe is long, but it bends toward justice.” Is that where you are at the moment? Or would another quote come to mind?

BILL GREEN: Let’s see, today is Wednesday? [laughs] I don’t consider myself a pessimist, but I do feel that my survival rests in my caution. I just got finished working on a project where one of the biggest challenges that organizers for women’s suffrage faced in getting African American women in a place like Minnesota involved was a sense that many of the Black women that they talked to had survived Reconstruction, and they saw what happened in the wake of the amendment of a constitution that expanded the right to vote to people of color. And once that happened, the friends of Blacks went their own separate ways as white supremacy spread throughout the South. Where were their white friends who had fought for emancipation, as one more African American was led to the lyncher’s rope? We today are a part of a long continuum. You can’t divorce the present from what has happened in the past. To a great degree, many African Americans believe, what was, is; and what is, will be. Now I don’t think that we’re repeating the sins of the past completely. I don’t think we’re completely in the same state of affairs that we were, say, 15 years ago, 20 years ago, 40 years ago, 100 years ago. But I don’t feel that my lessons to my sons are irrelevant when they’re driving a car. I still caution them to be careful, if a police officer pulls them aside, because the officer just might be having a bad day. This kind of thing is still very much a part of us. The leader of one of the major parties is using the tropes of the ’40s, ’50s, and ’60s and he’s got a lot of support. Now whether he is leading a minority of voters remains to be seen. If you’re asking for a kind of sense of what’s happening in America, we can talk about what’s happening. But if you’re asking me whether this is a step forward, I think it’s foolish to say “yes” without doing what the profession requires us to do — and that is to have some kind of broader perspective. Thank you for asking that question, though. I appreciate that. Jacqui’s known for asking difficult questions.

A complete transcription of this lively and informative conversation can be found in our current issue of Hennepin History magazine, available on newsstands throughout the county or here to receive this membership benefit.