From the Archives: “Minnie” the USS Minneapolis Naval Cruiser 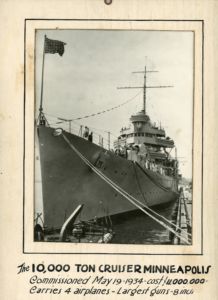 “Minnie” seems like such a diminutive name for a 10,000-ton naval cruiser designed to carry up to four airplanes. But that’s exactly what the crew decided to call the USS Minneapolis (CA-36) when she went into service in 1934. The USS Minneapolis was one of the most decorated Navy ships during World War II. It was also the second vessel to carry the name Minneapolis. 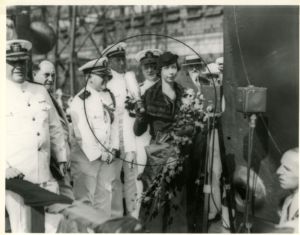 The USS Minneapolis launched from Philadelphia in 1933, with Miss Grace L. Newton of Minneapolis, Minnesota sponsoring the ceremonial launch. The lightweight cruiser received alterations and was reclassified as a heavy cruiser early in its service. Captain Gordon W. Haines commanded the ship when it was commissioned and put into service in 1934.

The ship was severely damaged during the Battle of Tassafaronga, sustaining two torpedo hits to the port-side bow and number two fireroom. The crew managed to keep the ship afloat long enough to reach Tulagi, where they camouflaged it with foliage until temporary repairs allowed the cruiser to sail for Mare Island Naval Shipyard. 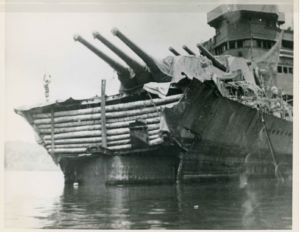 Heavy damage after the Battle of Tassafaronga.

The USS Minneapolis was repaired and returned for duty in August of 1943. In 1945, the cruiser was flying the flag of Admiral Thomas C. Kinkaid when he accepted the Japanese surrender of Korea. After further patrol and the return of veterans to the West coast, the cruiser once again sailed the Panama Canal and headed back to Philadelphia. The USS Minneapolis was decommissioned in 1947 after receiving seventeen battle stars for her service. 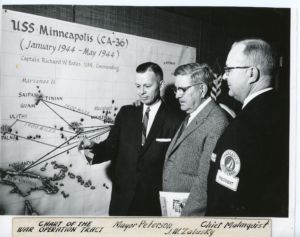 The museum’s USS Minneapolis archival collection was donated over time by members of the USS Minneapolis Association. The Association was founded in 1984 by former crew members of the USS Minneapolis, who met annually until about 2007. The collection includes manuals and schematics from the ship, a small set of correspondence and ephemera around the ceremonial launching of the ship and a series of photographs depicting the ship at sea, damage from war and the donation of objects to the museum in the 1950s-1960s.

All images are from the Hennepin History Museum archives unless otherwise noted.

This blog post was created by Michele Hagen, Interim Archivist.