From the Archives: Company B Last Man Club

“We are still marching on … Let’s keep in touch”

Company B Last Man Club was an organization of Spanish-American War Veterans from Company B of the 13th Minnesota Volunteer Infantry. The Thirteenth Minnesota Volunteer Infantry served during the Spanish American War of 1898 as well as the first year of the Philippine-American War (1899-1902). Although three other Minnesota regiments were mustered during the war (the 12th, the 14th, and, eventually, the 15th), the 13th was the only one that was deployed overseas and saw combat. The regiment took part in the Battle of Manila and helped American forces capture the city. The 13th sustained the heaviest casualties of any American unit in the attack, with 23 members of the regiment being wounded or killed. On October 12th of 1899, the unit arrived home to a reception at the Minnesota State Capital attended by thousands of well-wishers and family members, as well as President William McKinley and members of his cabinet.

The first meeting of the Last Man Club took place on December 4, 1926 in Minneapolis, Minnesota. In all, 108 members of Company B were still living at the time of the club’s founding. Of these, fourteen were able to be present at the first meeting. Those who could not attend in person were asked to respond by letter, which an additional fifteen were able to do. The objectives of the club were set forth as follows:

Approximately 75 members kept in contact with the club throughout the years. The Last Man Club held its final meeting in 1963. The sole survivor, Clarence E. Keatley, drank the bottle of pre-war champagne, toasting to the memory of his comrades. One of the other final acts set forth by the club was to donate their records to the Hennepin History Museum. These records included meeting minutes, notices of upcoming meetings, and club newsletters both for Company B Last Man Club and the 13th Minnesota Regimental Association. There are also many letters written by club members who responded to the “roll call,” as well as books written by John Bowe, a member of Company B, a book about Company I, a history of the 13th Minnesota Volunteer Infantry, newspaper clippings and articles, annual rosters, and a personal scrapbook.

For a historical retrospective on the 13th Minnesota Volunteers at Manilla, see the Winter 1973 issue of Hennepin History Magazine . 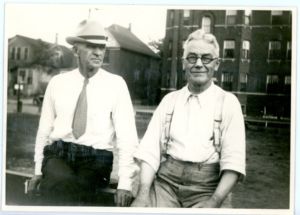 This blog post was created by Michele Hagen, Interim Archivist. Historical research completed by Jennie Walker Knoot, Processing Archivist. This collection was processed in part with funds provided by the State of Minnesota from the Arts and Cultural Heritage Fund through the Minnesota Historical Society.