From the Archives: Central High, The First Public High School in Minneapolis

Of all the public high schools in Minneapolis, Central High had the honor of being the first. The roots of Central High School took hold in the 1860s, when Union Elementary School added high school level education to its curriculum. Over its 122-year history, the school continued to meet the needs of its ever-growing and changing population, while leading the way in education and innovation. The Minneapolis Board of Education opened the doors to the first designated Central High School building in 1878. 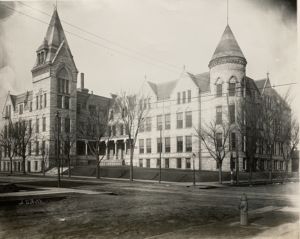 This first Central High was located at 4th Avenue and 11th Street in downtown Minneapolis. It was designed by architects Long and Haglin and was notable for its specialized rooms, including four study halls, fifteen recitation rooms, a laboratory, and two lecture halls. 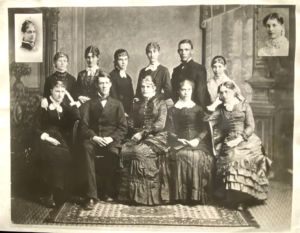 The population of Minneapolis continued to grow during the next three decades. Despite the addition of an annex to the building, the student body outgrew the facility. In 1913, the Board of Education under Superintendent Charles M. Jordan decided to move Central to a new building. The old building, which later housed Minneapolis Vocational High School, was razed in 1936. Minneapolitans still often affectionately referred to the old building as Old Central High. 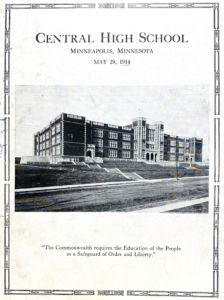 The second Central High School building opened in 1913 at 4th Avenue South and 34th Street in South Minneapolis. It was one of many new high schools of its era, which also included East (1900), West (1907), North (1915), Edison (1922), and Roosevelt (1922). Designed by St. Louis architect William B. Ittner, the new Central High building was featured in The Western Architect. It also appeared in the Minneapolis Journal, which published a series of articles exploring whether the school was worth the $765,000 that taxpayers had paid for its construction.

The school featured an innovative approach to education: “realistic” vocational training designed to help the students “get somewhere.” According to an article from the Minneapolis Journal in 1914, book learning at Central was supported by actual practice. Boys learned about carpentry, machine work, forge work and other mechanical trades while girls were offered courses on cookery, sewing and housekeeping designed to make them “competent wives.” 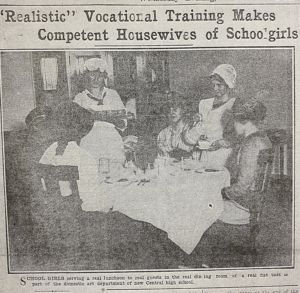 When the United States entered World War II, the students, teachers, and alumni of Central High School became involved in war efforts, both through military service and by purchasing war bonds. Part of the museum’s archival collection focuses on this time period. It features a publication titled War Service Record, 1941-1945, a bound volume recording information about Central High students who served in the military. It was compiled by teacher Clare Bell in the late 1940s.

Central continued to serve the needs of Minneapolis students all the way into the 1980s before closing in 1982. Reasons cited were the age of the building and the cost to remodel it. Eighteen other public schools in Minneapolis also closed that year. The building was razed in 1989. The long list of famous graduates from Central includes actor Eddie Albert, sportswriter and broadcaster Halsey Hall, Minneapolis Mayors George Leech and Sharon Sayles Belton, Asian-American actor James Hong and the musician Prince.

All images are from the Hennepin History Museum archives unless otherwise noted.

This blog post was created by Michele Hagen, Interim Archivist.