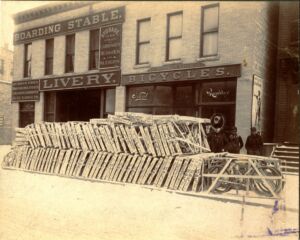 Did you get one of these for Christmas?

Perhaps you found a horse under your tree, but more likely you’ve gotten or given something from an establishment like the one on the right side of the image above.

My first bicycle was a blue Schwinn with a white banana seat. Many years ago, getting a bike on Christmas Day in the Midwest was a beautiful but crushing experience. It was akin to seeing the ocean for the first time and then realizing ‘we don’t have anything like this back home’. You can’t touch the (new) bike until spring! You can try to ride it around in the kitchen, but moms don’t appreciate that (at least mine didn’t).

It looks like there’s still some time to ride in the photo above. Frederick Roach sold bicycles like these for $35 each in his shop at 519 Hennepin Ave. The place was a couple doors away from his original shop and family home at 517 Hennepin. The Roach family owned 516, 517, and 519 Hennepin. You may have seen this image in Hennepin History’s magazine: 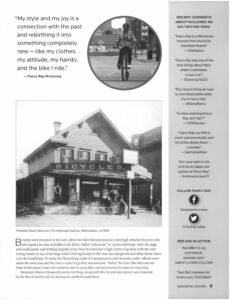 Fredrick Roach was 19 years old when he opened his first bicycle shop in 1887. He sounds like the kind of hustler you’d want on your team. The Minneapolis Journal claims that his was the first bike repair shop in Minneapolis. He sold the Rambler bicycle “on easy terms” presumably because he believed in the work he did and thought bicycles were for everyone. I don’t have any proof (yet), but I’m going to go out on a limb and say that’s why he hired the two young African American boys in the photo at a time when a few counties away, Black people were being written about as part of the cycling experience: 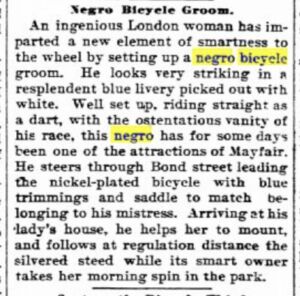 Fredrick Roach was 34 in 1901. He had already been instrumental in the formation of the city’s bicycle board of trade, was involved in the development and upkeep of bike paths in the county, and even arranged his shop to accommodate a mower blade grinder to keep blades sharp for the maintenance of those paths. In June of 1901, The Minneapolis Daily Times claimed he had the only grinder in the city at the time. 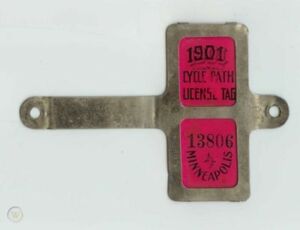 This 1901 Minneapolis bicycle tag was auctioned on the Worthpointe.com site.

Roach gives his thoughts on why cycling was here to stay in a Minneapolis Daily Times article. He mentions that in the year prior to the photo above (1901), 30,000 bike path tags were sold. Even today, that sounds like a huge number of people using a bicycle as their primary means of transportation.

Roach was certainly one of the first bike sellers who was fully invested in cycling. He believed in the bicycle, but he was also a smart businessman. Soon after the Indian motorcycle debuted in the Twin-Cities, he was one of the first retailers to sell it in his new shop at 7th St. North.

Unfortunately, Roach’s trail cools after this move. Don’t quote me (because as I write this, I am in Tampa, FL, far from our Ancestry subscription ), but I know that by 1940, Roach was doing real estate. It’s possible that he started as early as the 1920s. By 1925 the properties on Hennepin had tremendously increased in value and been sold. Frederick and his brother, were sued by their sister for more than $200K, which would’ve been her cut when he sold the properties.

Images of the Roach bike shop were donated to Hennepin History Museum by Frederick and Ida Roach’s daughter, Thoris in 1972.