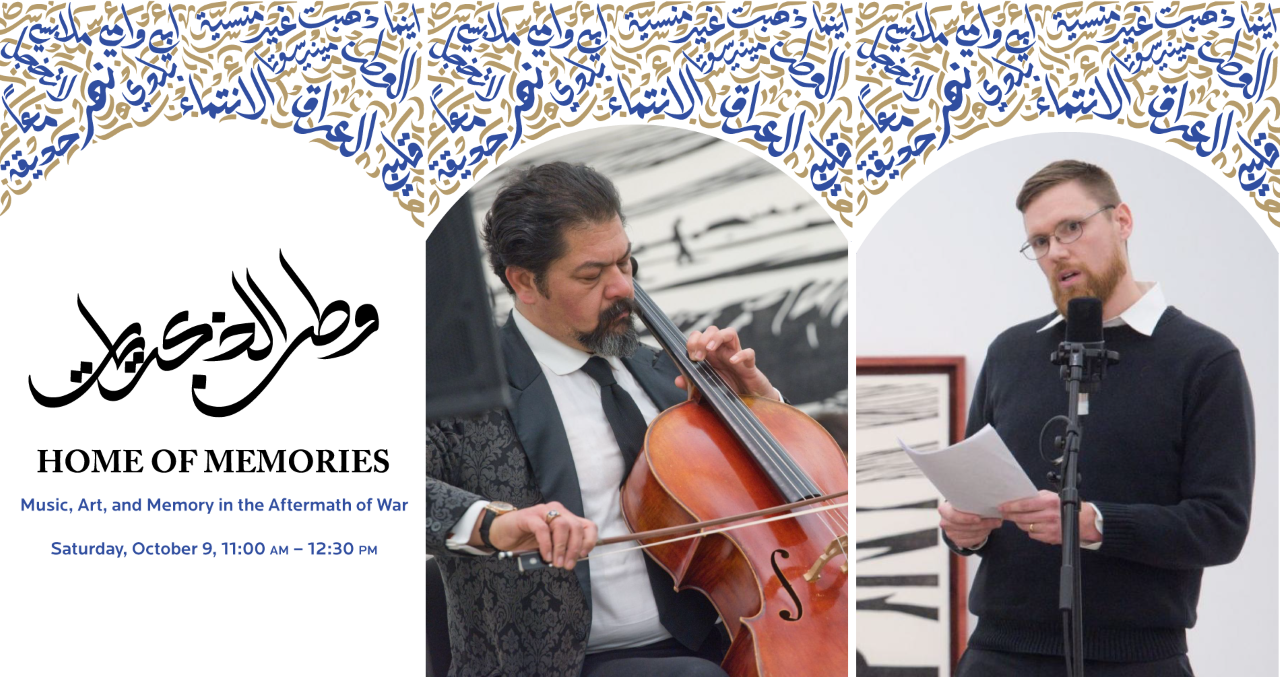 Music, Art, and Memory in the Aftermath of War

Join artist Aaron Hughes and maestro Karim Wasfi as they share music and poetry from Poetry Despite/Music Despite (Eternal War Requiem) and discuss art and memory keeping in the aftermath of war.

Poetry Despite/Music Despite (Eternal War Requiem) connects artists across time and place, from World War I to the “Global War on Terror,” from the US to Iraq. These connections acknowledge the recurring traumas of war and, conversely, the human connections that happen despite the pain.

The project emerged out of Hughes’ personal reflections on Benjamin Britten’s War Requiem (originally written for the 1962 consecration of the new Coventry Cathedral), the nine poems by World War I poet Wilfred Owen featured in the War Requiem, and maestro Karim Wasfi’s “spontaneous compositions,” solo cello performances held at sites of bombings in Iraq. These works, along with Hughes’ own memories of being a U.S. soldier in Iraq in 2003-2004, resonate with each other. They facilitate connections between the current state of endless war and its historical antecedents. Aptly, Wasfi has said of his cello performances: “I was connecting everything: death, spirits, bodies, life.” Hughes was inspired to attempt something similar.

Come to listen, reflect, and connect.

This event is pay as you can.

This event is presented with HOME OF MEMORIES: Portraits and Stories of Iraqi Minnesotans, now on view at Hennepin History Museum through January 29, 2022.

Karim Wasfi is a renowned cellist, conductor, and founder of Peace Through Arts Foundation known for his “spontaneous compositions,” solo cello performances held at sites of recent bombings in Iraq. Wasfi conducted the Iraqi National Symphony Orchestra 2007-2016 and established the Italy Iraq Scholarship program in Modena as well as the British Council office in 2005. Wasfi utilizes sound resonance on the brain, neuroscience function, cultural diplomacy, a unique music and sound approach for healing, cross cultural integration, deradicalization, and prevention of tension. His innovative approach helped thousands of people in crisis areas to rise from violence, fear, and intimidation of terror, by conveying creative peaceful resonance through music, sound and arts. Wasfi’s current effort is to rebuild Iraq’s war torn areas by focusing on healing and rebuilding inner and societal peace that aims to proactively prevent future relapse into war and conflict.

Aaron Hughes is an artist, curator, organizer, teacher, anti-war activist, and Iraq War veteran. Working through an interdisciplinary practice rooted in drawing and printmaking, Hughes works collaboratively to create meaning out of personal and collective trauma, transform systems of oppression, and seek liberation. He develops projects that often utilize popular research strategies, experiments with forms of direct democracy, and operate in solidarity with the people most impacted by structural violence. Hughes works with a range of art and activist groups, including Justseeds Artists’ Cooperative, About Face: Veterans Against the War, emerging Veteran Art Movement, and Prison + Neighborhood Arts/Education Project.

Image Credit: Photo from Poetry Despite/Music Despite (Eternal War Requiem) performance at the BALTIC Centre for Contemporary Art in 2019.