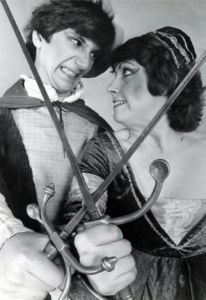 Commedia Theater Company was a professional, improvisational touring theater from 1975 until the early-1990s. It specialized in outdoor park performances and toured across seven states within the Midwest and Canada. Former members of Shakespeare in the Streets Company created Commedia after their original company disbanded in 1974. The company produced and performed classic and original improvisational comedies, theater in the parks and dinner theater and provided workshops and educational services. Commedia’s approach to theater emphasized the relationship between actor and audience; plays were performed without a stage or microphones and actors spoke directly to the audience.

Commedia offered a regional residency program in which the troupe would be engaged by a sponsor and based in a city central to the region being served. During the period of the residency, the actors would travel within a 50-mile radius to various communities and schools in order to provide performances and educational services. 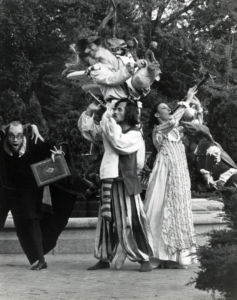 This archive collection is processed with a complete finding aid and is available to researchers with an appointment by contacting the museum archivist. See collection B569 Commedia.