Quick! Think of the word “clubhouse”. What image comes to mind? Do you see found boards or even cardboard boxes cobbled together with “KEEP OUT!” painted across the entrance? Leave it to a librarian to do things differently. In 1907, Gratia Countryman, the first woman to head the Minneapolis Public Library, called 25 of some of the most influential women in Minneapolis to her office and gave a pitch for a women’s club that would rise to the increasing needs of the community. If you want to learn more about the history of the organization, check Women’s Club of Minneapolis website. But we recently processed a collection of publications, administration, and program documents from the Women’s Club of Minneapolis (WCOM) that gave insight as to how the current WCOM clubhouse came to be.

As you can imagine, the women on whom Countryman called, with family names like Pillsbury, McKnight, & Crosby, couldn’t just rub elbows in any old place. At first, they met in the public library and in private homes, but eventually the women’s club had to have a club house. Their first location was in the Handicraft Guild Building where they shared spaces with artists, designers, craftsmen and their educators at 89 10th Street South. This may be where the connection between the WCOM and the arts community began to take shape. They conducted business there between 1908 and 1913. 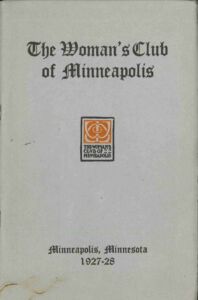 In 1907, the club had 150 members, but by 1913, their numbers had grown to 700. Their numbers grew from an extensive waiting list, from which they’d accept 50 members at a time. Thanks to a frugal treasurer, they had funds to purchase a large house. In the 5 years they were living with their parents, so to speak, in the Handicraft Guild Building, they managed to save around $40K from dues and donations. The Women’s Club had their eye on 1526 Harmon Place near Loring Park.

By 1924, the WCOM had 1000 members, and while 1526 was a sizable home, it was not made to withstand the force of the WCOM. The women set to raising money to build their own club house to suit their needs. They formed building and finance committees in 1924. Mrs. F.M. Crosby was on both. The ways and means committee, began in 1925, planned benefits and fundraisers, while an overall increase in the cost of dues (in 1926) also went to raise funds for the new clubhouse.

The WCOM purchased the lot at 410 Oak Grove Street, their current location in December of 1924. Here’s some of what they wanted in the new place:

It looks like the money flew fast and furious from the time they started planning in 1924. The women of the club wanted to avoid taking out a loan for the property. By 1926, the club had assets and pledges totaling nearly $200K for their project. They sold the old clubhouse for $43K (approximately what they paid for the new lot), and they had a reserve of about 17K. The club broke ground on the clubhouse in March of 1927 and began to build with the funds they had generated. The famed Foshay Tower designer, Léon Arnal was chosen to design the house, while the women of the club oversaw all furniture and decorations.

Mrs. Lucy Kingsley, a co-chair of the building committee, had imagined a large fireplace in the clubhouse, but unfortunately, she passed away before the clubhouse was completed. In turn, her husband donated the fireplace with an imported Italian stone mantle in his wife’s name. The house was then completed in February of 1928.

Aside from raising money to build their house, the WCOM also put their funds toward making changes in the community, and their website does a pretty good job of laying those out, however, they did have some firsts that aren’t bragged about on the site. They organized the first parent teacher association, as well as the first permanent school playground. They also brought about the first medical inspection in schools.

I haven’t seen the house, so someone will have to let me know how the women’s vision turned out. The WCOM collection at HHM was processed in part with funds provided by the state of Minnesota from the Arts and Cultural Heritage Fund through the Minnesota Historical Society.